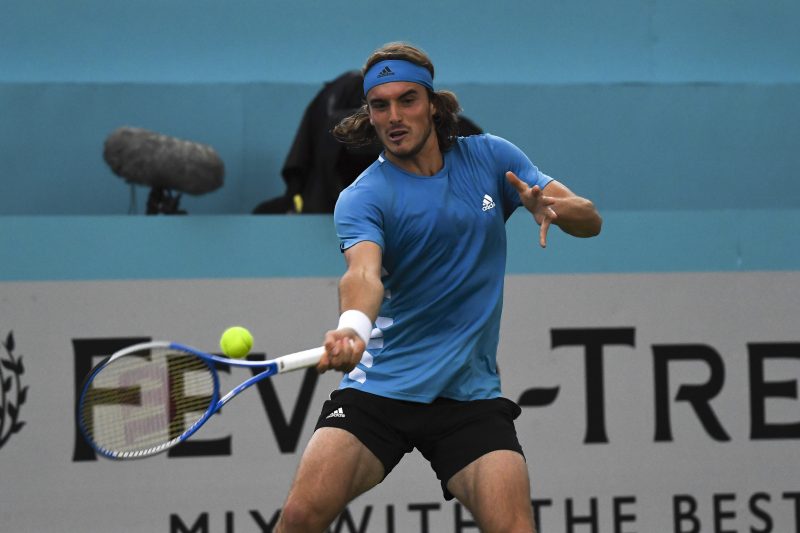 London: Stefanos Tsitsipas narrowly avoided a shock exit from the Fever-Tree championships after coming through a marathon second-round encounter.

Gracing his presence on the grass courts in London for the second time on Thursday after finishing his first round match earlier, he faced France’s Jeremy Chardy. A semi-finalist at the tournament 12 months ago, who has lost his last seven matches against top 10 opposition. On paper, the Greek was the heavy favorite to triumph, but in reality, it was a more closely contested encounter with Tsitsipas coming out on top to win 4-6, 7-6(0), 7-6(4). Hitting 40 winners to 26 unforced errors, and saving seven out of the 11 break points he faced.

“I didn’t play very well at the beginning of the match. I found my rhythm for some reason when he (Chardy) was serving for the match.” Tsitsipas said afterward.
“Everything was working, positive and good. I managed to win the tiebreak in the second set, kept the momentum going.’
“I didn’t play my best, but somehow I survived.”

The roller coaster encounter saw the Greek struggle with his consistency early on against Chardy, whose use of slice came in handy for him. Down a set, it looked as if it was over for Tsitsipas after he got broken at 4-4 in the second. Handing the Frenchman a chance to serve the match out. Nevertheless, the top seed battled back to force the proceedings into a tiebreaker. Which he emphatically dominated with a seven-point winning streak.

All to play for, a marathon Chardy service game lasting almost 15 minutes opened up the decider. Fighting hard, Tsitsipas secured his breakthrough two games later as he broke for only the second time in the entire match. Closing in on the victory, the seesaw continued with an exchange of breaks occurring twice. With little disparity between the two, it was only fitting that a tiebreaker should separate the two. Which Tsitsipas managed to prevail in after spending two hours and 38 minutes on the court.

“In my first round match, I didn’t feel very good on the court. Now I feel a little bit better. Like I am advancing and proceeding with my play.” The world No.6 evaluated.
“It’s a very short period that you play on the grass. You kind of forget when you leave the grass season. You mentally forget how it is because there are certain thoughts on the grass that takes time to digest.”

Next up for the Australian Open semi-finalist will be Canadian rising star Felix Auger-Aliassime. The world No.21 toppled the controversial Nick Kyrgios 6-7(4), 7-6(3), 7-5. The match ended with Kyrgios allegedly tanking on match point before throwing his racket outside of the court.

“I’ve never beaten Felix in the singles. He has a big game and big potential. He can play really well, really aggressive and can be unpredictable.” Tsitsipas previewed.

Earlier in the day, a duo of seeds crashed out of the tournament. Kevin Anderson, who was playing in his first tournament since Miami, lost 6-1, 4-6, 6-4, to Gilles Simon. Meanwhile, Stan Wawrinka was stunned by Nicolas Mahut. Wawrinka was leading the decider 5-3, but failed to serve the match out and ended up losing 3-6, 7-5, 7-6(2).

“I just kept fighting and I came back at the end of the second set.” Said 2007 finalist Mahut.
“I kept playing better and better. I’m so happy to play on this court. It is one of the best courts I have ever played on. It’s a great win for me, I have so much respect for Stan.”

Mahut and Simon will play each other in the quarter-finals.

Berrettini Stops Seppi In A “Mat” Versus “Andy” Battle