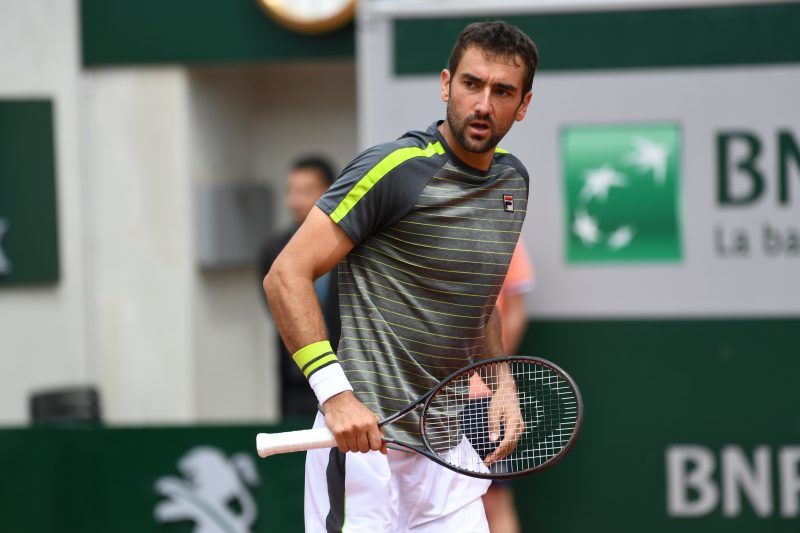 With both of those all-time greats being heavy favorites against relatively unknown Germans, let’s turn our attention to what look to be the more competitive matches on the schedule. Two former world No.3’s will meet, both of whom are struggling to find their form. The 2015 men’s singles champion goes up against one of 2019’s fastest-rising players. And two of France’s most popular players will face tough, seeded opposition. Another rather chilly forecast in Paris could enable some prolonged battles on Wednesday.

Both men arrived at Roland Garros with nearly as many defeats this season as wins. Since winning the Davis Cup to end 2018, Cilic has battled injury and illness. He’s yet to get past the quarterfinals at any tournament played this year, and hasn’t beaten a seeded player either. Dimitrov’s woes have been going on for much longer. Since winning the biggest title of his career at 2017’s ATP Finals, he’s won no titles, and only reached one final. Grigor recently split with his longtime coach, Dani Vallverdu, though Andre Agassi and Radek Stepanek remain a part of his team. Dimitrov is barely ranked inside the top 50, and is only 8-8 lifetime at the French Open. Cilic has achieved more much success here, reaching the quarterfinals in each of the last two years. Marin won easily on Sunday, while Grigor needed five sets to put away Janko Tipsarevic after having a two-set lead. Cilic has won four of their five meetings, though they’ve all taken place on hard courts. All of this makes Cilic feel like the favorite, but when you consider how little confidence he currently possesses, a Dimitrov upset would not be shocking.

Embed from Getty Images
The winner between Cilic and Dimitrov will face the winner here. Wawrinka has worked his way back up to be a seeded player, but this is one of the toughest unseeded opponents he could draw in the second round. Chilean Cristian Garin, who turns 23 tomorrow, already has 20 wins on clay this season. That includes two titles (Houston, Munich) as well as being a finalist in Sao Paulo. But is Garin ready to upset the former champion on this Major stage? This is a considerable step up from the smaller events Cristian has thrived at. However, Wawrinka is not exactly brimming with confidence right now. Since March, he went just 6-6 heading into this tournament, and arrived here on a three-match losing streak. That includes an opening round loss last at his home tournament of Geneva last week. In their first career meeting, I actually give the slight edge to Garin, the player who’s done a lot more winning of late.

Embed from Getty Images
Over the past 18 months, Tsonga has only played a total of 40 matches. He’s another former top five player who’s career has been derailed by injuries, something Nishikori can definitely sympathize with. Jo is currently ranked outside the top 80, though in recent months has been using wild cards and his protected ranking to gain some wins at smaller tournaments. Nishikori meanwhile did not have a strong clay court season, winning just six matches in four tournaments. Kei holds a 5-3 edge over Jo, but Tsonga won their only match on clay. That was in the quarterfinals of this tournament four years ago, a match decided in five sets. With the French fans on Court Philippe-Chatrier firmly behind him, Jo may just rise to the occasion again on this day.

Embed from Getty Images
Similarly, the Court Suzanne-Lenglen crowd will be loud in their support of Mladenovic. It was two years ago in Paris when Kiki made a thrilling run to the quarterfinals. But since that time, she’s struggled mightily in singles, while maintaining some strong results in doubles. She recently hired Sascha Bajin, the former coach of Naomi Osaka, and her singles results have immediately rebounded. Including qualifying rounds, Mladenovic has garnered 10 match wins over the past six weeks. Just two weeks ago in Rome, she beat three top 25 players: Ash Barty, Belinda Bencic, and Caroline Garcia. Petra though got the better of Kiki last month in the quarterfinals of Istanbul, in a clay court quarterfinal decided by a third set tiebreak. Martic went on to win that title, and has quietly become a consistent performer on tour. She has twice reached the fourth round here, as recently as 2017. But this is another case where the Parisians could play a crucial role in the match outcome. I expect Mladenovic to recapture some of the magic of two years ago and prevail.

Embed from Getty Images
Speaking of Kikis, one of the tournament favorites will end the day’s play on Court Philippe-Chatrier. Bertens is one of three players, along with Naomi Osaka and Karolina Pliskova, who can leave Paris as the world No.1. It was three years ago at Roland Garros when Kiki first broke through at a Major, with a surprising run to the semifinals. But at the 11 Majors since, Bertens has only once advanced out of the first week. Kiki has flourished outside of the Majors, most recently raising the trophy in Madrid, where she took out three top 10 players in as many days. She has already faced Kuzmova twice this year. The 21-year-old from Slovankia prevailed in a third set tiebreak in Dubai, with Bertens getting revenge a month later in Miami in another three-setter. Viktoria is fully capable of taking advantage if Kiki repeats her history of not playing her best at the Majors. Despite the newfound pressure of being one of the favorites, I still see Bertens finding a way through an opponent she knows very well.

Other notable matches on Day 4:

Related Topics:2019 French Open
Up Next