10 Years Ago in Madrid: Nadal and Djokovic Play a Three-Set Semifinal for Over Four Hours - UBITENNIS 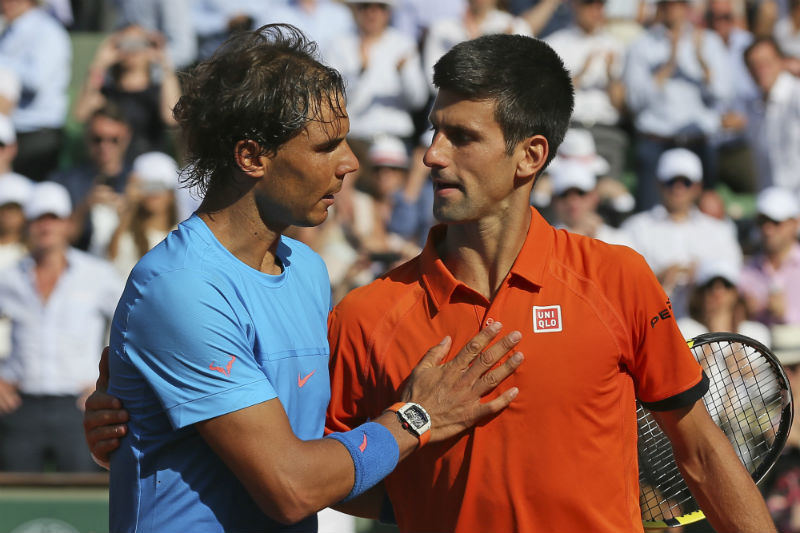 In 2009, Rafael Nadal had already solidified himself as the King of Clay.  Rafa was undefeated at Roland Garros, having won all four times he played there.  He arrived in Madrid as reigning champion at three of the four Majors, having finally defeated Roger Federer in the final of Wimbledon, and repeating that feat at the Australian Open.

Comparatively, Novak Djokovic was yet to fully establish himself.  Djokovic only owned one Major title to Nadal’s six. Novak hadn’t advanced farther than the semifinals at the last four Majors, and wouldn’t return to a Major final for another 15 months.  But a victory over Nadal on clay might serve as a turning point in Novak’s career.

Coming into this event, Djokovic was yet to defeat Nadal on clay.  Overall Novak had only prevailed in four of their 17 matches to date, and had lost to Rafa twice on clay in just the past few weeks.   Neither man had dropped a set prior to this semifinal, but no one anticipated the extended drama that was about to play out.

In the first set, Djokovic broke Nadal in his first service game, which would be the only break of the set.  Novak was forcing Rafa to make uncharacteristic errors, as Nadal had 14 unforced and only five winners in the set.  Djokovic won the first set comfortably in 50 minutes, 6-3.

There wouldn’t be another break of serve until the third set.  In the second, Djokovic had a total of four break points in three different Nadal service games, but would fail to get a return into play on any of those four occasions.  When Rafa held for 6-5, Novak would give one of his sarcastic round of applause to the Spanish crowd when they cheered his error. Djokovic would exhibit many signs of frustration as the match went on, which could only encourage Nadal’s belief in mounting a comeback.  Nadal’s only break point of the set came at 6-5, which was also a set point, but Djokovic stayed on the offensive and forced a tiebreak. At 3-2 in the second set tiebreak, Rafa would smack a forehand right on the line to get the minibreak, and wouldn’t look back. Nadal would take the tiebreak 7-5, in a second set that lasted one hour and 37 minutes.

In the third set, Djokovic was highly agitated to start.  Nadal though would give him a chance to break at 2-1 with a poor service game.  On the second break point, Novak hit a huge forehand close to the line to grab a 3-1 lead.  But in true Rafa fashion, that’s when he applied even more pressure to Djokovic. At 30-30 in the next game, Nadal hit a drop shot winner to end a 32-shot rally, and Djokovic began to feel cramping in his left leg, nearly three hours into the match.  A forehand error would hand the break right back to Nadal. Those would be the last break points of the match. Djokovic would then take a medical timeout and have his legs massaged, and received further such treatment during changeovers as the set progressed.  Novak would get to deuce in two of Rafa’s forthcoming service games, including the 6-5 game, but never earned a chance to break.

After three hours and 40 minutes of play, they reached the third set tiebreak.  The first minibreak would go to Djokovic at 3-3, as Nadal hit a routine forehand long.  But Novak would again give the lead right back, hitting his own forehand long on the very next point.  At 4-4, Rafa had a great look at a crosscourt forehand pass for another minibreak, but it clipped the tape.  Djokovic would get another minibreak at 5-5, as Nadal hit a backhand long, giving Novak a match point on his serve.  On the 20th shot of the rally, Nadal would pull a huge forehand up the line for a winner to stay alive, getting his home crowd on their feet.

Djokovic immediately earned a second match point in a 19-shot rally off a Nadal backhand error, but Rafa would save it with a forehand winner on another 19-shot rally, despite a blistering Novak return on a second serve.  At 7-7, a service winner would give Nadal his first match point, which Djokovic saved with a drop shot/forehand passing shot combo. An unreturned serve gave Djokovic his third match point at 9-8, but his backhand return would land just long.  After they switched sides again, Rafa hit a huge forehand winner down the line off a great Djokovic return in the corner. And on his second match point at 10-9, another forehand down the line clinched the victory for Nadal, four hours and two minutes after they started.  Despite winning five more points overall, Djokovic went down in defeat, to the delight of the Spanish crowd.

This was of course a preview of many marathon matches to come in this rivalry.  Their long rallies with the court spread well beyond the painted lines would define men’s tennis for the next decade.  On this day, the difference was Nadal’s confidence, positivity, and relentless nature.

The next day in the final, an understandably depleted Nadal would suffer a rare loss to Roger Federer on clay.  A few weeks later, Nadal would shockingly go down in defeat at the French Open to Robin Soderling, his first of only two career defeats at Roland Garros.  That would leave the door open for Federer to win his only French Open title, completing his career Grand Slam. Djokovic would not overcome Nadal on clay until two years later at this same event.