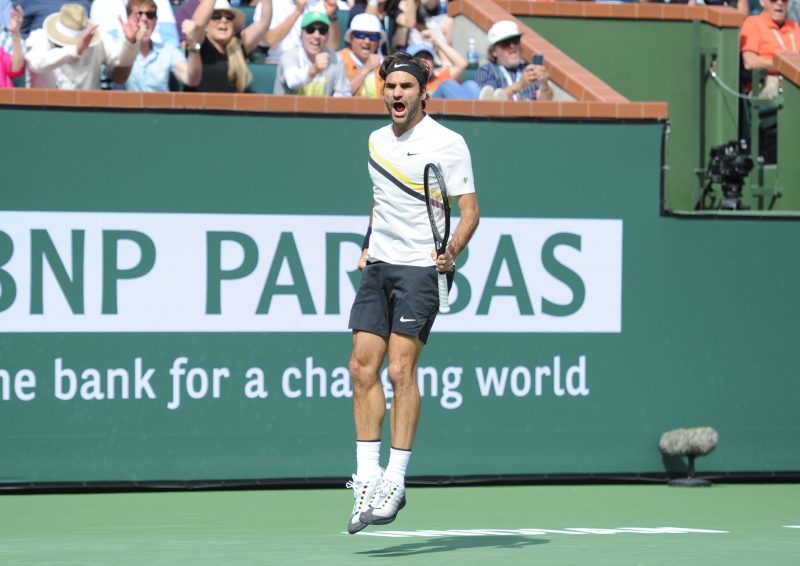 Roger Federer produced a stunning display to beat Denis Shapovalov 6-2 6-4 and advance to the Miami Open final for the fifth time.

The Swiss, 37, will face defending champion John Isner in the championship match after the American beat Felix Auger-Aliassime 7-6(3) 7-6(4) in the other semi-final.

“(Facing a big server like Isner is) like a penalty shoot-out in soccer,” Federer said in his on-court interview. “It’s just in tennis. I actually quite enjoy it, so for me, I’ll be the goalie on Sunday. I’ll try my very best, get as many balls back as possible, and hopefully we’ll have a good match.”

The Swiss was at his brilliant best in the first set against Shapovalov. He then seized his first opportunity to break in the second set and held firm on serve after that to secure victory.

The first game of the match lasted well over five minutes as the World No.3 tried hard to earn an immediate break.

Shapovalov eventually held on, but the length of the game enabled the Swiss to settle. He held to love and broke the Canadian to move 2-1 ahead.

Federer then went into overdrive. He held easily again and put pressure on the World No.23’s serve. Shapovalov could not handle the assault. He made a few errors and suddenly found himself 4-1 behind.

The Swiss closed out the set clinically. He secured an easy hold and then almost broke for a third time to take the set 6-1.

He did not manage it. Shapovalov held on, but it only delayed the inevitable. Federer served out the set comfortably.

In the second set, the Canadian put up much more of a fight. He dropped serve in the third game but got better and better as the set wore on.

This was reflected in the comfort of his service games. He learnt how to dominate on serve against the 20-time Grand Slam champion.

It did not matter today as it was already too late to affect the result. Federer made sure he gave nothing away when he was serving and that was enough for him to win 6-4.

However, if Shapovalov can re-create the highest level he produced for more of the match the next time he plays Federer, perhaps the result will be different.

For Federer, Sunday’s clash with Isner represents a great chance to put his defeat to Dominic Thiem in the Indian Wells final behind him. If he succeeds, he will claim his 101st title.