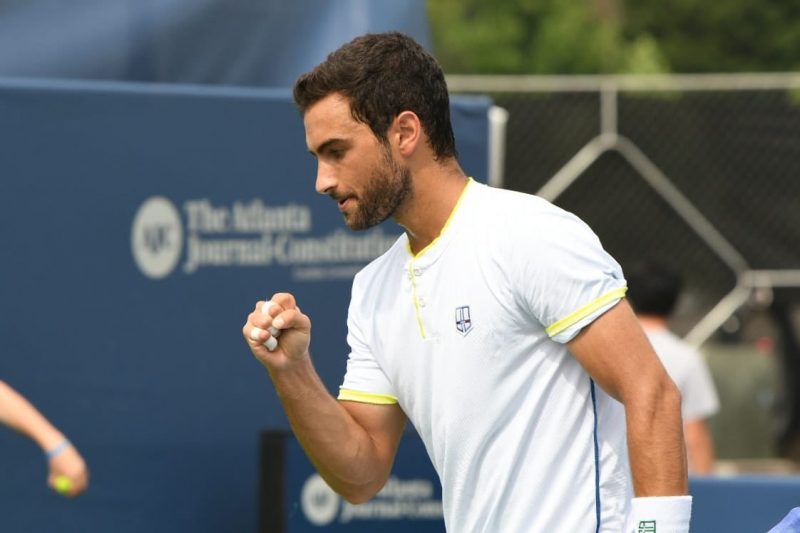 Most people are familiar with the concept of Instagram. Members upload a bunch of appealing and entertaining photos with the objective of getting a mass amount of likes and publicity. But for world No.152 Noah Rubin, he is using the platform to show the reality of life as a tennis player.

Earlier this year, the 22-year-old launched ‘Behind The Racket’ on Instagram. His aim is to show both the highs and lows tennis players experiance. In each picture is a person holding a tennis racket in front of their face. Attached to the photo is a paragraph detailing their thoughts. Topics include financial struggles, mental health, living up to family expectations and bereavement.

“To let down the people closest to me, my friends and family, is my most daunting fear. From an early age I was pretty aware about how many lives I affected. How many people had to sacrifice time, energy and money. The idea that it may not be worth it, or there might not be a way to repay them, haunts me at times. It’s what will take me to that next level, or break me, but to impact the world you cannot let that happen and I won’t.” Noah wrote in his first post on January 19th.

Since the launch, numerous tennis players have gotten involved in the initiative as they shared their own personal story. They include Nicole Gibbs, Mitchell Krueger, Chris Eubanks, Jamie Loeb and Bjorn Fratangelo.

The most recent post was from former Australian Open quarter-finalist Tennys Sandgren, who recounted the moment he discovered his father had died.

”My dad passed away in October of 2011. I had been pro for only about three months at this point. I received one of the worst phone calls anyone could ever get. I was at a 10k future in Texas when I entered my housing for the week. It was around 8 or 9 p.m when my mother called me. I think a part of me is still in that room to this day.” Sandgren wrote.

In a recent interview with NY Sports Day, Rubin said he has been inspired by a photoblog called ‘Humans of New York.’ A hugely popular website that collects stories and photos from people on the streets of the American city to show everyday life. Something Rubin is now bringing to the world of tennis.

“Besides winning a grand slam or getting a gold medal, a true dream of mine is to bring the excitement and awareness back to American tennis.” He said.
“This guy (Brandon Stanton) created something called Humans of New York. It’s kind of a every day look into the life of a new yorker and telling their story. I want to bring this to tennis and I want to use my reach (to do so) and say ‘this is us.'”

Behind The Racket currently has nearly 3000 followers (as of 13/2/2019). Although the account is still in its early stages, it has already proven to be a hit with many on the tour.

“People have been incredibly receptive. The players have taken it to heart and are using it as an outlet to share their story.” Rubin explained.
“I’ve been getting some incredible feedback and I’m really enjoying the process. Through playing the tournament I’ll have some bigger guys (posting) and I should be having Nick Kyrgios do one in the next few days.”

On the tour Rubin played in the New York Open this week. He lost in the first round to seventh seed Jordan Thompson.

You can keep up to date with Rubin’s project by following https://www.instagram.com/behindtheracquet/.

Related Topics:Noah Rubin
Up Next

Simona Halep Rises To No.2 With Win In Doha, But Insists Focus Isn’t On The Rankings