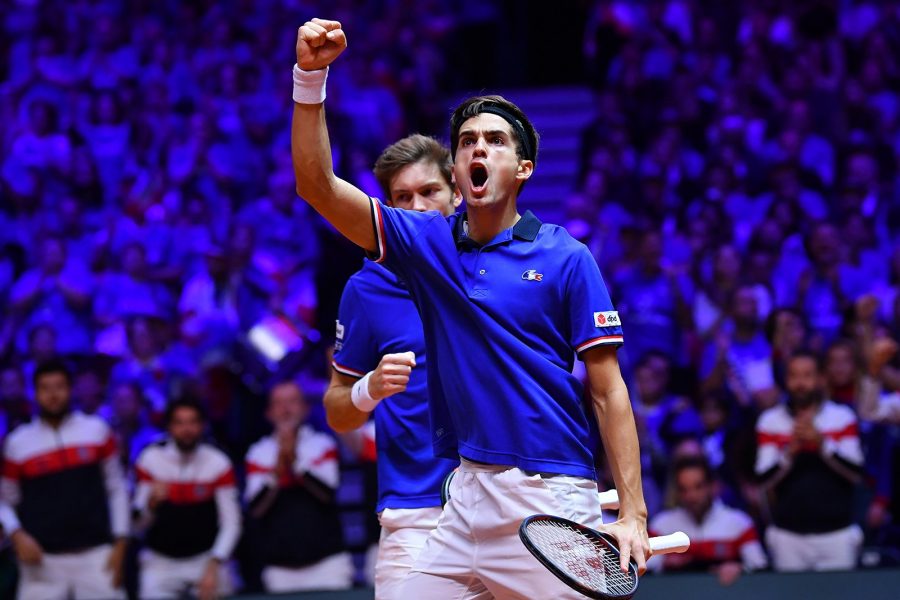 Pierre Hugues Herbert and Nicolas Mahut scored a vital 6-4 6-4 3-6 7-6 win for France over Croatia’s Ivan Dodig and Mate Pavic in a thrilling doubles match on Saturday in Lille after a 3-hour and 38 minute battle to keep French hopes alive after Borna Coric and Marin Cilic won the first two singles matches on Friday afternoon.

Mahut and Herbert, who became the third French team to win the Roland Garros doubles title in Paris last June and reached the final at last week’s ATP Finals in London, needed to win the doubles match and they kept the home team’s hopes alive by scoring a thrilling 6-4 6-4 3-6 7-6 (7-3) in front of 22910 spectators in the Stade Pierre Mauroy in Lille. With this win France closed the gap to 2-1 ahead of Sunday’s reverse singles matches.

Herbert and Mahut dropped their serve just twice from the nine break point chances they faced and converted three of their eleven break points.

Pavic and Dodig wasted three game points at 3-3 in the first set before dropping serve for the first time in the match in the seventh game. Herbert and Mahut held serve in the 10th game at love to close out the first set 6-4. Pavic and Dodig squandered a game point at 4-4 before Herbert and Mahut broke serve at 15 in the next game after Dodig made his second double fault. The French doubles team held serve at 30 to close out the second set 6-4.

Mahut and Herbert earned an early break in the first game of the third set. Dodig saved four break points at 0-2 down in the third set.

The home team built up a 3-1 lead, but Dodig and Pavic reeled off five consecutive games with two breaks of serve in the sixth and eighth games to win the third set 6-3 forcing the match to the fourth set.

Dodig and Pavic did not convert three break points in the first game of the fourth set. Pavic saved three match points to hold for 5-5, as he was serving at 4-5 to stay in the match. in the tie-break Mahut and Herbert earned an early mini-break with a forehand return at the start of the tie-break. They sealed the win with a double mini-break on the 10th point to clinch the tie-break 7-3 sending the match to the fourth singles rubber on Sunday.

“We tried to keep the team alive today. I think tonight we are going to have the smile at the hotel. We won this one but we still have two more matches to win. We want to win the Davis Cup and I think our player can do it tomorrow”, said Mahut.

France faces a daunting task on Sunday, as only one team in history managed to recover from a 0-2 deficit in the history of Davis Cup Finals. The only team who achieved this feat was Australia, who came back from 0-2 down to win the Davis Cup Trophy against the USA in 1939. If France manages the come-back feat, they would claim their 11th Davis Cup title.

Croatia is one win away from winning their second Davis Cup in history 13 years after their first triumph against Slovakia with a team featuring Ivan Ljubicic and Mario Ancic. World number 7 player Marin Cilic will face Jeremy Chardy in the first Sunday singles rubber. Cilic will be bidding to score his 30th Davis Cup win on Sunday.

French captain Yannick Noah faces the tough decision, whether to give another chance to Chardy or try Lucas Pouille, who won the decisive fifth match last year against Belgium. Pouille won a title in Montpellier and reached two finals in Marseille and Dubai in the first part of the season, but he struggled in the second half.