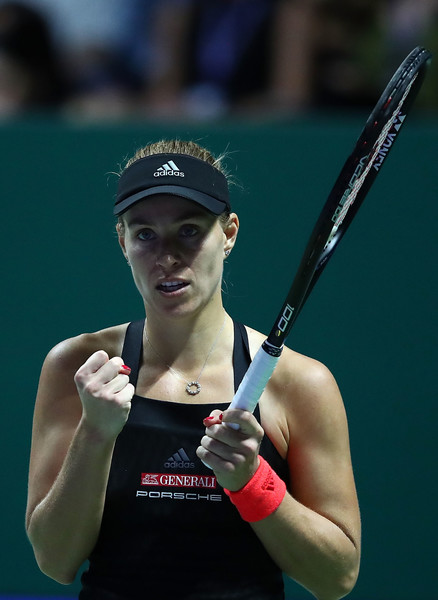 The match lasted 2 and a half hours as the German kept her cool to defeat Osaka in the battle of the grand slam champions.

The Wimbledon champion will now play Sloane Stephens on Friday as she aims to reach the semi-finals in Singapore for the second time in two years.

As for Osaka, her over-aggressiveness cost her and a win for Kiki Bertens in the second match will see her eliminated from the finals.

The first few games saw a nervy start for both women as the stakes were high with both players losing their opening match in the Red Group.

After three breaks of serve to start the match, the top seed eventually gained control with her first serve as she became the first player to hold in the match.

The Japanese player steadily rose to the occasion though and kept trying to break a stubborn Kerber. Although the German was able to control her emotions and the match in the opening set.

The Wimbledon champion was making forehand winners with ease as she had to work hard for her narrow first set lead. Despite having five break points in the final game, Osaka couldn’t break Kerber as she failed to be the aggressor, first set to Kerber, 6-4.

As Osaka played with a hamstring problem in the second set, the world number two continued to fight throughout the match as she came back from a break down twice to level the set at 3-3.

It was now turning into a match full of world-class defending and shot-making as Osaka was broken to love in the ninth game. A controlled Kerber looked like she would close out the match for a straight sets win, but there was a twist.

This is as the German became very nervy with her first set which allowed the US Open champion to fight back. A run of three games in a row stole the set for Osaka and frustration had hit the three time grand slam champion.

Nervousness was a key part of this match for both players as they knew that a loss would leave their fate in the hands of other players.

The third set saw a tense affair with Kerber controlling her emotions through the art of muttering while Osaka was on her knees in frustration. However the difference proved to be Kerber’s fight and intensity as she clawed herself a break of serve out of nowhere.

The Japanese star became over-aggressive as she became more frustrated and despite a mini back-spasm, the slow conditions sealed the win for Kerber as she won her first match of this year’s WTA Finals.

The win means Kerber’s hopes of reaching the semi-finals are still alive as she takes on Sloane Stephens on Friday. While Naomi Osaka could be eliminated if Kiki Bertens manages to beat Stephens later on in the evening.

Osaka and Bertens will meet on Friday in the last Round Robin match of the US Open champion’s campaign.