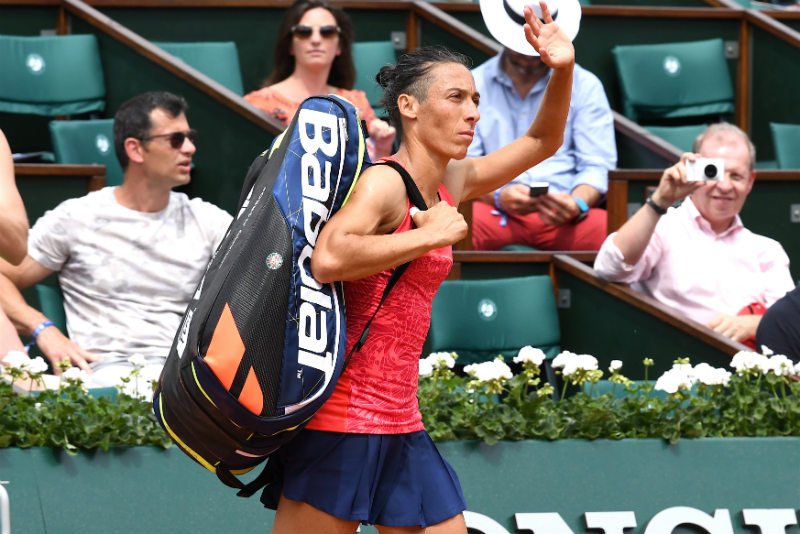 Italian veteran Francesca Schiavone has retired from tennis at the age of 38 following a professional career spanning more than 20 years.

The former world No.4 announced her decision during quarter-finals day at the US Open. A tournament she reached the last eight at back in 2003 and 2010. During what was a heartfelt and emotional speech, she said she have been debating stepping away from the sport since the conclusion of this year’s French Open.

“It was three or four months ago that I was thinking (about retirement). After Roland Garros I was already in that direction. Then I spent some months to think about it, to be sure. To feel good and happy with myself.” Schiavone told reporters in New York.

The decision to retire comes after what has been a difficult year for the 38-year-old. She hasn’t played a competitive match since losing in the first round of the Gstaad Open back in July. In total, she has lost all seven on her main draw matches played this season. Resulting in her falling down the rankings to 454th in the world.

During her career, Schiavone has featured in 20 WTA finals, winning eight titles. Her biggest triumph occurred back in 2010 when she defeated Samantha Stosur to win the French Open. In total she has featured in 70 grand slam main draws. The third highest in the Open Era after Amy Frazier (71) and Venus Williams (80).  Serena Williams is closely behind Schiavone with 69 appearances.

Schiavone also enjoyed success in the doubles by reaching a ranking high of 8th in 2007. Claiming a total of seven doubles titles on the tour between 2001-2009. She was also runner-up at the 2008 French Open with partner Casey Dellacqua.

“When I was 18-year-old I had two dreams. The first won was to win at Roland Garros and the second was to become top 10 in the world. I’ve completed that, so I am very very happy and lucky.” She said.
“My heart says that I am at peace with this. That I’m very happy about my career, my life and everything.”

Schiavone will not leave the sport completely. She continues to have goals of claiming the biggest title in the sport, but as a coach watching from the sidelines. Schiavone has been mentoring young players within recent months and hopes to one day use her skills to help train the best in the world.

“After 20 years of my career and life. I have new dreams. I have new dreams every day of my life. My new dream is to come here (to Flushing Meadows) and win a grand slam as a coach.” She stated.
“It would be a fantastic emotion for me. For sure, to help some players to reach their goals.”

Playing in an era that featured the Williams sisters and the ‘big four,’ Schiavone has relished her chances to play alongside them. In total she has scored 29 wins against top 10 players, including two against Serena Williams on the clay.

“One of the most important things I learn in this sport is to be a simple person, to be a human person. To have a good attitude.” She said
“I think we have many examples on the court with Roger, Rafa and Serena. It is great for me to grow up with them and have a change to play against them.”

Related Topics:FeaturedFrancesca Schiavone
Up Next