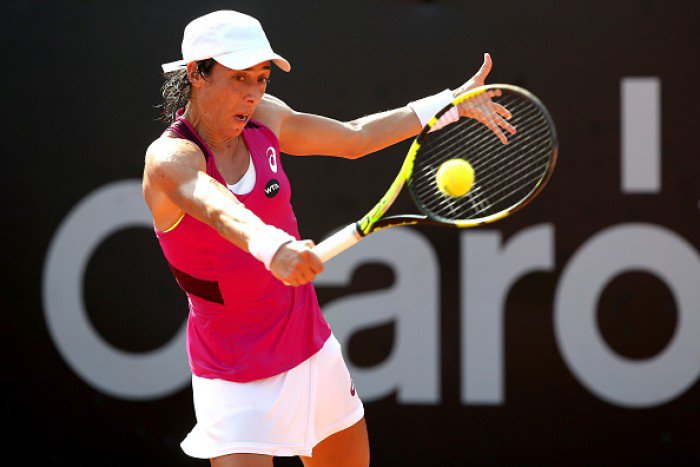 Francesca Schiavone won her 7th WTA title in Rio de Janeiro, at her 18th final on the tour, beating American Shelby Rogers in three sets by 2-6 6-2 6-2. With this win, the first since 2013 for the 2010 French Open champion, Schiavone will climb back in the top 100 of the rankings becoming the second oldest top 100 player right after Venus Williams, who was born just 6 days before the Italian.

At her second WTA final, both conquered on clay, Rogers played a solid first set and was up a break in the second, but then surrendered to the Italian’s better physical condition.

Rogers is the first player to see a chance to break serve, with Schiavone serving at 2-2 in the first set. The American stays aggressive, and manages to seize her opportunity right away, closing in at the net and winning the point with a backhand volley winner.

Serving at 3-2 Shelby holds serve easily once again, to build a 4-2 lead looking in control of the match. The young American then manages to break again, in the 7th game, after a stunning backhand down the line on which Schiavone can’t manage to create her web of defence. Coming to the net to put pressure on the Italian, Shelby gets another break and leads 5-2.

Shelby closes the first set by 6-2 after 31 minutes at her third set point chance, as Schiavone’s defensive backhand finds the net.

The American starts the second set with 2 chances to break Schiavone’s serve up 15-40. The Italian serves a double fault on the first break point and loses her opening service game.

Francesca sees her first break point in the match as Rogers serves a double fault at 30-30. Returning on the line, the 2010 French Open champions gets the break and screams in relief, setting the score tied at 1-1.

The Italian convincingly holds serve in the third game, to get back to the lead at 2-1.

As the rallies grow longer, Rogers starts to miss more shots. The American looking in confusion loses her serve for the second time in a row, missing a very easy smash wide. For the first time in the match, Schiavone is up a break 3-1.

The Italian swinging more freely closes the fifth game with an ace, to lead 4-1 in the second set, then 5-2. The American can’t control the rallies as she did in the first set and continues with her streak of unforced errors.

After more than one hour, Schiavone wins the second set 6-2, as Rogers misses two backhands long in a row from 30-30 sending the match to a decider.

The American faces two break points in the fourth game when serving down 1-2, but saves both as the Italian fails to put pressure on the important moments. Shelby holds and shouts “C’Mon”.

Soon after, Francesca seizes her opportunity and breaks in the 6th game, with Rogers serving down 2-3. The Italian gets to 0-40 and then closes the game as Rogers tries a serve and volley approach, missing the forehand volley long.

The Italian on a roll closes the 7th game with an ace on the second serve and leads 5-2, assuring herself a chance to serve for the championship.

Finally, Schiavone breaks again and wins the match at her second championship point as Rogers hits another shot long.

It is the first WTA title for the evergreen Italian, who had last won a WTA title in 2013 in Marrakech.

With Schiavone’s win there are now 6 Italians holding a WTA title, one each.

Roberta Vinci wins her first match as a top-10 player, as Sara Errani fights back from a set down to edge Tsvetana Pironkova