The Real Reason Behind Federer And Nadal’s Continued Success - UBITENNIS 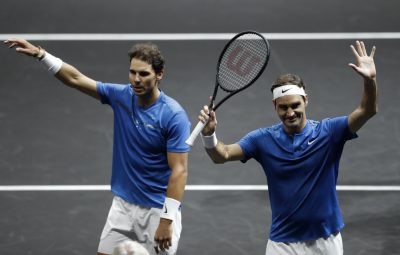 Djokovic won his 13th Grand Slam title when he secured his fourth Wimbledon crown at the All England Club earlier this month and according to the Swede, Djokovic is responsible for Federer and Nadal’s appetite to keep on improving their respective games.

“The chase was launched when Federer was no longer winning much, when Nadal was winning especially at Roland Garros and Novak was winning almost all the rest, to disrupt the established order,” Wilander told L’Equipe.

“And it is starting again. These three are again going to try to go still higher.

“I am not saying that Roger or Rafa can do it but they are going to see a reason to continue to work to challenge Djokovic’s game.

“And that is massive. At New York we are going to know who is the best in the world in 2018.

“In play is the title of the ITF world champion. It will not be the rankings which count because, for them, the feeling of being the best of the year prevails over the World No.1 ranking.”

“I cannot imagine that Djokovic could have won Wimbledon without the return to his box of all those familiar faces,” Wilander added.

“That is the key for me. It is thanks to that that he is a bit calmer while re-finding his machine-like style and killer instinct.

“His coach Marian Vajda coming back is the key. Jelena, his wife, is the key.

“They are all again reunited behind him, like a kind of cordon sanitaire which protects Novak from everything. And the chase is back on.

“It is for that reason that the return of Djokovic to the top is very exciting.”

‘Novak Djokovic Is The Most Talented Player In The World’