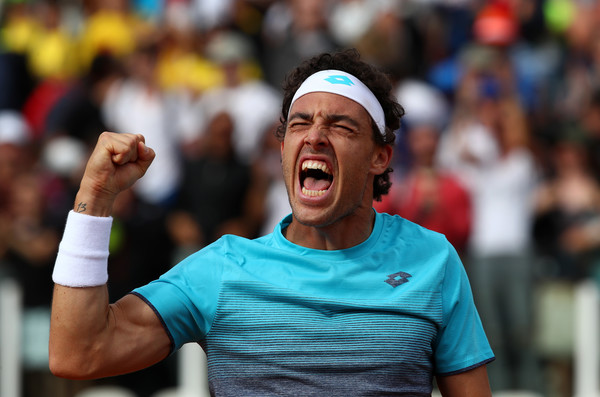 Marco Cecchinato eased past Guido Pella in the championship match in Umag on Sunday, giving the 25-year-old his second title in his breakout year.

Cecchinato, the No. 3 seed, won 6-2, 7-6, to add the Croatian Open title to his win in Budapest in April, also on the red clay. The Italian lost his serve just once and dominated both the opening set and decisive tiebreak, surviving a brief dip in form midway through the second set.

In the tiebreak, Cecchinato hit a booming forehand deep into the corner for a 3-0 lead, smashed his sixth ace to set up championship point and hit a short slice on his second attempt to secure the victory. He then slid onto his back, caking himself in clay, in celebration.

The world No. 27, who will move to a new career high of 22 on Monday, played a clean match. He put 78 percent of first serves in play, had no double faults and saved seven of eight break points he faced. Pella, meanwhile, won fewer than a third of second serve points and saved barely half of the break points Cecchinato earned.

That was especially evident in the first set, when Pella ended a rally on break point at 1-2 by knocking a ball into the net. The Argentine struggled with his timing throughout the set, failing to convert his few break chances and dropping another service game at 2-5 to hand Cecchinato the opening set.

Though the match was predominantly played at the baseline, Cecchinato demonstrated impressive net play in the first set. That began to fade in the second frame; he struggled to win net points and handed Pella a break — on his fifth opportunity in the 2-2 game — when he sent a forehand into the doubles alley.

But a fine backhand pass returned the Italian to level terms shortly thereafter, setting up the final tiebreak. With it, Cecchinato won his sixth straight set after losing his opening one of the tournament, taking advantage of a favorable draw in which Pella was his highest-ranked opponent.

The Argentine, for his part, falls to 0-3 in tour finals. Nevertheless, he continues a strong summer that saw him shock Marin Cilic to reach the third round of Wimbledon, and moves up 15 spots to No. 57 in the rankings.

Related Topics:Marco Cecchinato
Up Next