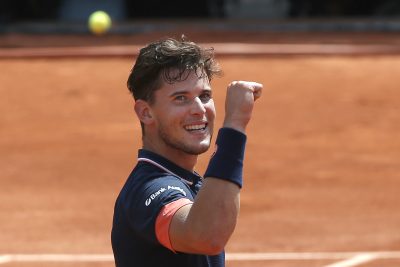 World No. 8 Dominic Thiem eased into his maiden Roland Garros final after making short work of Novak Djokovic’s slayer Marco Cecchinato in their semifinal on Friday. Thiem was at his absolute best as he raced to his first ever Grand Slam final after completely dominating Cecchinato from start to finish, coasting to a comfortable 7-5, 7-6, 6-1 victory in two hours and 17 minutes.  He will meet defending champion Rafael Nadal or 2009 US Open champion Juan Martin Del Potro in Sunday’s showpiece final in Paris.

Thiem was off to a flyer as he forced a break-point at 30-40 in the opening game of the match. But the Argentine fired a wide serve and a forehand crosscourt winner to save it. Thiem then earned another opportunity with some penetrating hitting before forcing Cecchinato to spray a backhand long for the service break.

Thiem backed up the break with a swift hold to love. He served a massive ace down the T to lay down an early marker of his intent for an early 2-0 lead. A dominant Thiem was employing the one-two punch to great effect as he romped to a 4-2 lead. Big serves and even bigger forehands were simply too good for Cecchinato, who defeated former champ Djokovic in the previous round.

However, the 8th game turned out to be a major disappointment for Thiem as Cecchinato, who barely won a point on the seventh seed’s serve till that stage of the contest brought up three break points. Thiem saved all three, but another missed backhand from him eventually gifted the break back to Cecchinato for 4-4.

The pendulum swung once again in the 11th game as Thiem broke just when he needed to break. Thiem really cranked up the heat as both players traded blows off both wings. Thiem ultimately came out on top as he crunched a forehand winner down the line after dragging Cecchinato from side to side.

In the following game, Thiem served out the opening set to 15. He dominated early on but looked to have allowed Cecchinato back during the concluding stages. However, he responded and raised his level to claim the set in 46 minutes.

Thiem had multiple chances to break his rival early on in the second set. His first opportunity arrived in the first game, but he couldn’t capitalize as Cecchinato produced possibly his best drop shot of the encounter to save it. Thiem had two more chances in game No. 5, but his adversary once again managed to get away as he saved them both – the first with a delicate volley and the next with a serve out wide.

The quality of tennis was simply world class as neither player was giving an inch to the other. In the end, the set went to a tiebreak, which once again witnessed a see-saw battle between the pair. Grueling rallies, massive hitting and deceptive play became the norm as Thiem seized the early momentum to lead 5-2.  Thiem then brought up three set points at 6-3, but failed to convert even one of them.

Thiem then found himself in a real spot of bother as Cecchinato had three opportunities to level the proceedings at a set apiece. But, like Thiem he too couldn’t convert those chances and it was Thiem, who finally got the job done on his fifth set point to claim an enthralling tiebreak 12-10.

After winning set No. 2 Thiem went into an overdrive as he found his groove and almost never missed. Within a blink of an eye, he found himself 5-1 up with a double break of serve. Thiem then made no mistake, picking up a free point on serve to bring up match point before sealing the deal at the first time of asking with a scorching forehand winner.

Del Potro Is A ‘Nightmare’ Opponent For Nadal: Wilander