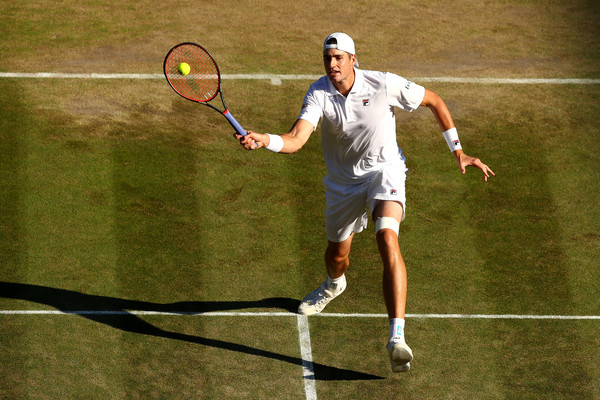 John Isner moved into the semifinals at Wimbledon for the first time with by defeating Milos Raonic 6-7, 7-6, 6-4, 6-3 on Wednesday in a match with 56 combined aces and no break points in the first two sets.

Raonic, in fact, had more aces — 31 to 25 — and winners — 59 to 55 — in defeat, but Isner converted three break points and held all 21 of his service games while facing just one break opportunity himself.

The match turned, unsurprisingly, in a tiebreak. Raonic had set point at 5-6 in the second set decider, forcing the ninth seeded American to make several lunging efforts at the net, including one overhead that forced the 6-foot-10 Isner to jump and extend his racket as far as he could. He saved the set point, won the set to level the match at a set apiece shortly thereafter, and gained noticeable momentum in going on to win.

In a slight departure from the expected course, Isner needed no tiebreaks to win the final two sets. He built leads in several Raonic service games in the third set, earning the match’s first break point at 2-2 after an hour and 45 minutes of play. He forced it by forcing Raonic to hit a tricky half-volley wide, then used a powerful backhand return to jump ahead.

The American, however, found himself in late trouble, staring down break point at 5-4. Raonic nearly went ahead 15-40 but hit a passing shot just wide; after an Isner double fault at 30-30, the American deposited a first serve just inside the sideline to see off the threat. He converted his second set point with an ace up the middle nearly as powerful.

In full control, Isner continued his exceptional play, aided by a recurring Raonic leg injury that hampered his movement in the final set. The defending champion in Miami went ahead 0-30 in the opening game, then had two break points at 2-2. A superb baseline backhand — one of many surprisingly strong darts on Isner’s weaker side — forced another awkward volley from Raonic that he could not handle.

Up a break, Isner cruised on serve and came near another break at 2-4. He closed out the match at first asking with a perfectly placed passing shot after drawing Raonic into the net, breaking for a third time to go past the quarterfinal round at a grand slam for the first time.

Isner, with 95 consecutive service holds, is the only player remaining who has not yet dropped his serve. Raonic took the first set on Wednesday without doing so, firing a forehand pass early in the tiebreak and adding an insurance mini-break later. He then seemed primed to win another set in such fashion after Isner double faulted away an edge in the second set tiebreak, but he recovered to earn a surprise semifinal meeting with Kevin Anderson in a match set to feature an encore of massive serving.