The “Who Will Face Roger” Non-Semifinal In Halle - UBITENNIS 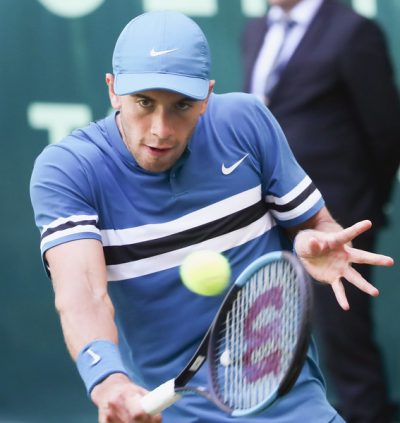 Roberto Bautista Agut of Spain confronted Borna Coric of Croatia in the second semi-final on Saturday at the Gerry Weber Open. Bautista Agut, the No. 4 seed, had a 21-10 career record on grass, along with one title on the surface at ‘s-Hertogenbosch in 2014. The unseeded Coric was 2-7 playing on the lawns. The two had faced off six times (three contests on clay and the same number on hard court) and Bautista Agut had a 4-2 lead in the series.

Both were looking for a place in the record book. A player from Spain or Croatia had never reached the final at the ATP 500 event taking place at Halle Westfalen, Germany. Carlos Moya, the only other Spaniard to make a semi-final showing, lost in 1999 to Nicklas Kulti of Sweden, 6-3, 6-4 (Nicolas Kiefer of Germany defeated Kulti, 6-3, 6-4 in the final). In 2015, Ivo Karlovic became the only Croatian to earn a spot in the semi-finals and he was “Tie-Broken” by Roger Federer, 7-6, 7-6. Federer went on to down Andreas Seppi of Italy, 7-6, 6-4 for the singles title.

Thanks to the time dictates of television football (aka soccer) coverage, the first semi-final between Federer and Denis Kudla of the US began at 11:30 a.m. earlier than the usual start-time in Halle. (Last year, the first semi-final started at 1:15 p.m.) The second 2018 semi-final kicked-off at 2:09 p.m. (in 2017, play began at 4:00 p.m.) and ended dramatically in a meager twenty-three minutes.

The score was 2-2, (both players having held serve) and Bautista Agut was serving in the fifth game of the first set. In a baseline exchange, he ran to his left and hit a backhand then, while trying to return to the center of the court, he slipped behind the baseline while attempting to move back to his right. He went down, and initially grabbed his right hip then rolled on his side to grasp his left hip. He took a medical timeout and was treated off-court. He returned to finish serving and held then walked to the net and told Coric he couldn’t continue. The official (but, in reality “unofficial” because in truth no information was provided) reason for his retirement was an injury to his left hip.

Only twenty-six points had been played and Bautista Agut was ahead by four (15-11). He had two opportunities to break serve, but Coric saved both, and he also served two more aces than his opponent – 4-2 was the statistical tally.

Following the almost “non-victory” victory, Coric admitted, “Today, I was a little bit lucky. I’m sorry for Roberto, but I can rest a little bit now, which is good.”

The 21- year-old who was born in Zagreb, Croatia, but lives in Dubai, United Arab Republic has appeared in three tour finals. He was the Marrakech champion (on terre battue) in 2017 defeating Phillip Kohlschreiber of Germany 5-7, 7-6, 7-5. A year earlier, he was a 6-3, 7-5 finalist at Chennai (on hard court) to Stan Wawrinka of Switzerland. Federico Delbonis of Argentina defeated him 6-2, 6-4 at Marrakech in 2016.

Tomorrow, the 21-year-old takes on the Gerry Weber Open “legend” Roger Federer. The 36-year-old has defeated Coric in both of their meetings. The first was in Dubai, in 2015, and the score was 6-2, 6-1. This spring their BNP Paribas Master 1000 confrontation, at Indian Wells was more of a test for Federer. The defending champion, who will be looking for his record setting tenth Gerry Weber Open title on Sunday, scored a 5-7, 6-4, 6-4 victory in the Southern California desert.

“I think our last match (Indian Wells), I played almost perfect,” Coric said. “I think it was a great match. I was really playing well, and at the end, I was maybe a little bit unlucky, but he showed why he is No. 1 in the World. I don’t think I need to change anything. I must play on that level which is not going to be easy for sure. I think that was my best match of the season, and I’m going to try to play on the same level again.”

Federer Can Have Fun, Too