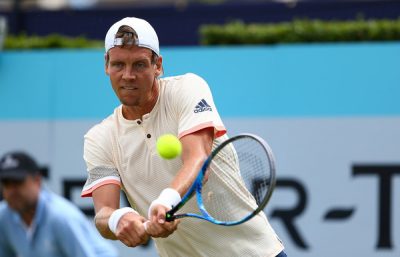 Tomas Berdych has announced his withdrawal from Wimbledon after revealing he has been fighting a back injury for the past few weeks.

The 2010 finalist has had a terrible European season after losing all three of his clay court matches as well as losing his first round match at Queens Club this week to Julien Benneteau. However it seems there has been a reason for his recent bad form as he announced that he has been suffering from back pains for quite a few weeks.

The Czech Republican released the following statement, which explained his withdrawal from Wimbledon this year:

“I am disappointed to inform you that I was forced to pull out of Wimbledon championship which will start next week. I have been struggling with back pain for a couple of months now and have tried every possible treatment and medical solution in order to be able to keep on competing. Unfortunately things have not got better and all my attempts to be ready and healthy for the grass season were not successful. I was very much looking forward to the Wimbledon Championship, where I have had great memories, however out of respect to my fellow competitors and to the Wimbledon Championship I will not be able to compete in great shape and in good health and I had to take a tough decision and give my back the necessary rest and  treatment for the next couple of weeks.”

The announcement comes as a big blow to Berdych, who is defending semi-final points that he won last year and has fantastic memories of reaching the final here in 2010. The 32 year old’s withdrawal means that he is likely to drop from world number 22 to outside the top 50 in the world when he returns later in the season.

Despite Berdych’s withdrawal, the Men’s draw still has a world class field with the tournament set to begin on the 2nd of July.

The “Who Will Face Roger” Non-Semifinal In Halle