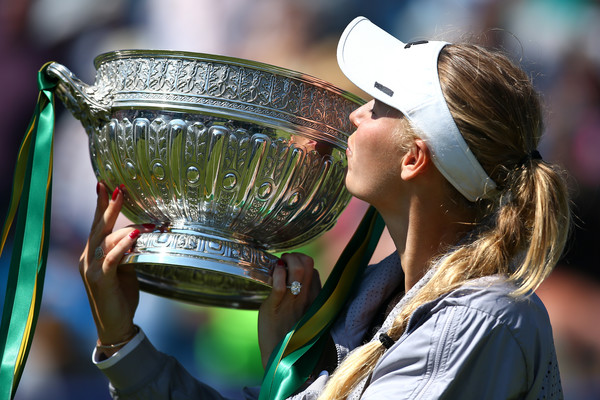 It is only the Dane’s second grass court trophy, and her first on the surface since she was last victorious at Devonshire Park in 2009 aged 18.

“It’s been a good week,” Wozniacki said. “I played some good tennis and I’m happy to have won.”

The Dane feels like she has often performed well in Eastbourne. She said, “I have played a lot of semi-finals and the final (last year), so it just feels like I have played well every time I have come here.”

Wozniacki withstood a barrage of big hits from Sabalenka in the opening game of the match. She saved four break points but eventually managed to hold.

The players then exchanged breaks in games three and four, before the Belarussian produced a superb drop shot to capitalise on some uncharacteristic errors from the Dane and break her again in game five.

Wozniacki started to play better. She came up with a couple of excellent passing shots and hit a sublime lob to earn a break point. However, Sabalenka saved it with a forehand winner and held to lead 5-3.

After the Dane clung onto her serve in game nine, everything changed. Wozniacki complained to the umpire about something and it seemed to rattle Sabalenka. She threw in an unforced error and a double fault to drop serve.

The World No.2 held easily to lead 6-5, and then hit a superb forehand winner down the line to put the Belarussian under pressure immediately.

Sabalenka crumbled and made two unforced errors, and suddenly the Dane had three set points. She only needed one, as she unfurled a crisp backhand down the line to seal the set. 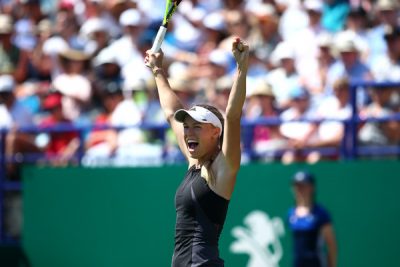 The second set began like the first – with aggression from the Belarussian. She hit a couple of big winners and benefitted from a couple of Wozniacki errors to gain an early break.

The Dane battled to an immediate break back, only to lose her serve again and fall 2-1 behind. Sabalenka then played wonderfully well to hold to love.

However, just two games later, the Belarussian made five unforced errors to allow Wozniacki back into the set.

That pattern repeated itself in games nine and ten, as Sabalenka produced a string of brilliant winners to break and then some atrocious errors to drop serve to love.

Both players held easily to take it to a tie-break, and Wozniacki looked set to lose it when she made three uncharacteristic errors to fall 4-1 behind.

Sabalenka then helped her out by missing two backhands, before Wozniacki clinched victory on her first match point with a trademark backhand down the line.

“Every time I go into a tournament I believe I can win it,” the Dane said. “Whether it happens or not, it just depends on how I play and how my opponents play. But I believe in myself.”

Wozniacki also paid tribute to her father, who has coached her for most of her career. She said, “My dad has been there since the start, and we have always worked great together.”

“He always has my back. I definitely wouldn’t be here if he wasn’t there helping me.”