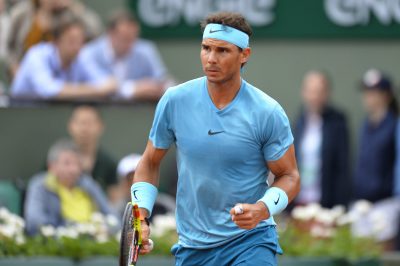 World No. 1 Rafael Nadal has finally revealed the secret to his clay-court dominance and his remarkable success at the French Open.

The 16-time Grand Slam champion, who sealed his spot in the second round of the ongoing French Open, was speaking to reporters after a comfortable straight-sets triumph over Simone Bolelli of Italy on Tuesday.

The Spaniard, who is the overwhelming favourite to lift his 11th trophy on Parisian clay, claimed that his hard working attitude is the biggest factor behind his dominant record on the surface. He has never been complacent, even while challenging lower raking opponents despite having a phenomenal record on the red dirt.

Nadal was in trouble against Bolelli in the third set and was able to make a successful comeback because he never took anything for granted. Emphasizing on the fact, he claimed that he will try to stay focused on each point against his adversaries in the upcoming matches because taking anyone of them lightly could prove to be costly for him.

“[It’s] not gonna happen, and there is a proof that that’s never happened, that I won 10 times here, 11 Monte-Carlo, 11 Barcelona, eight Romes,” Nadal said, referring to his remarkable dominance of the European clay court circuit.

“If you get complacent or too confident with yourself, for sure that’s not going to happen.

“That’s the reason I have success, because I go every day on court knowing that I can win, that I can lose, and that’s the sport.

“So anything can happen.”

Nadal will take on 78th ranked Guido Pella of Argentina for a place in the third round on Thursday. The Argentine set up his date with the Majorcan with his easy three-set victory over Joao Sousa of Portugal earlier in the day.

Djokovic Has No Chance of Winning the French Open, says Former World No. 1