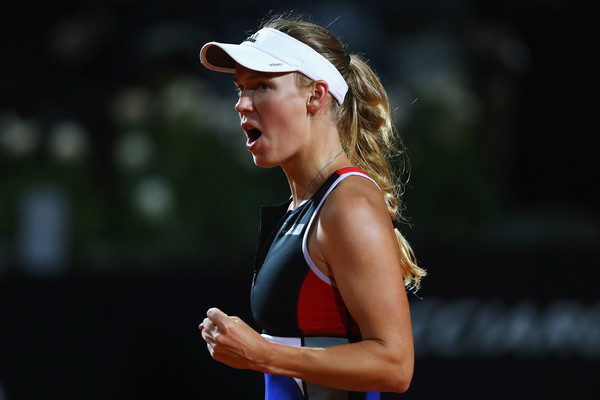 Caroline Wozniacki advanced to the quarter-final of the Italian Open for the second time in her career thanks to a hard fought 6-2 5-7 6-3 victory over Anastasija Sevastova.

The World No.2, who revealed earlier today that she struggles with allergies at the Foro Italico venue, reached the semi-final stage in 2011 but has failed to repeat that feat ever since.

Maybe this year will be different for Wozniacki. She started brilliantly against Sevastova and dominated the opening set with great movement and excellent shot-making.

The tricky Latvian raised her game in the second set and, after trading two breaks apiece with the Dane, she earned a crucial third break in game eleven to take the match into a decider. 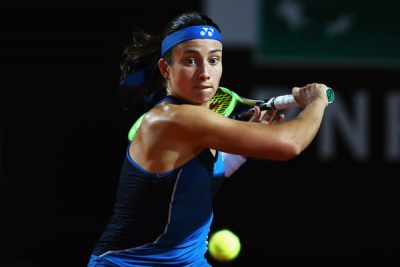 Any final set against Wozniacki is always likely to be difficult because of the Dane’s exceptional fitness. And so it proved, as the World No.2 ran her Latvian opponent ragged to win it 6-3.

It was a high-quality encounter throughout and Wozniacki had to produce some of her best-ever clay-court tennis to come through it. She hit a clutch of stunning drop shots that we probably would not see from her on another surface.

On the other hand, Sevastova is known for her varieties and she made use of her full range of shots. From 5-5 in the second set, she hit a succession of unerringly accurate winners as she won 8 out of 10 points to ensure the match went the distance.

Wozniacki’s reward for coming through this testing encounter is a last-eight clash with Anett Kontaveit. In round three, the Estonian beat Venus Williams for the second consecutive week and she will almost certainly make life difficult for the Dane. 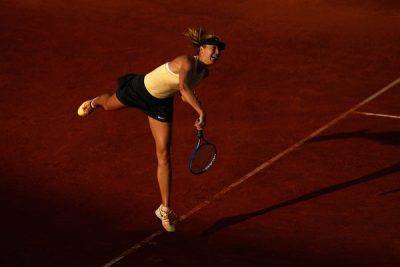 In the other half of the draw, Maria Sharapova marched on to a quarter-final showdown with Jelena Ostapenko by easing past Daria Gavrilova 6-3 6-4.

The Australian was back on court less than 15 hours after defeating Garbine Muguruza in a three-hour epic. And she struggled to cope with the Russian’s powerful ball-striking early on as she went 4-1 down.

Gavrilova got into the match in game six by forcing Sharapova to battle for over 11 minutes to hold serve. She then earned her first break of the match in game eight, only to lose her serve (again) and the set immediately afterwards.

In truth, neither player served well and it got even worse in that regard in the second set. Gavrilova, who failed to win a single point on her second serve, lost serve four times and Sharapova, whose first-serve percentage was just 56%, dropped serve on three occasions.

Fittingly, the five-time Grand Slam Champion wrapped up victory with a break in the tenth game to reach her second successive Premier quarter-final.

“I like the way I’m competing,” Sharapova said in her press conference. “I like the way I feel out there and I think that’s really important. It’s an inner feeling, sometimes maybe not something you can put into words.”

“But I just like the attitude I am playing with,” she continued. “I might have physical limitations going deep in the tournament. That’s normal for all players. We have to handle it the best that we can, playing back to back.

“But I like the intensity that I’m bringing. I like that, no matter the small ups and downs that I’ve had, I’m still able to deliver and be aggressive. I like that attitude – I think that’s the most important thing that’s come out of these matches.” 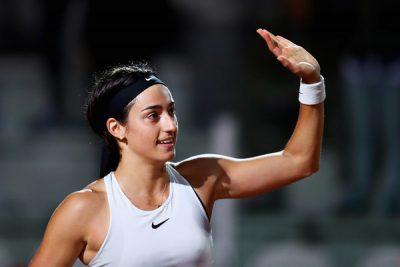 There was much better serving on display in another of the last-16 matches in Rome. Caroline Garcia had a first serve percentage of 75% and won 78% of points behind those serves as she beat Sloane Stephens 6-1 7-6(7).

The Frenchwoman has reached two successive semi-finals during a superb clay season so far, and she looked in total control as she blazed her way to the first set in just 26 minutes.

Stephens knuckled down and fought for every point during an infinitely tighter second set. However, it was Garcia who held her nerve in the tie-break to wrap up a straight-sets win and book a last-eight meeting with Simona Halep.