Maria Sharapova Knocked Out By Garcia In Stuttgart - UBITENNIS 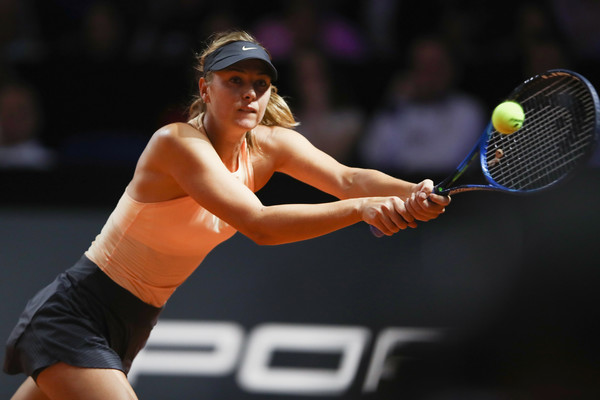 Maria Sharapova suffered her fourth straight loss on the WTA tour as Caroline Garcia produced a stirring comeback to beat the Russian 3-6 7-6(6) 6-4 in Stuttgart.

Defeat in the first round means Sharapova will drop outside the World’s Top 50 after she reached Roberta Vinci, Ekaterina Makarova and Anett Kontaveit en route to the semi-final in 2017.

Ultimately it came down to who played the big points better. And although this is an area Sharapova historically excels in, today it was the Frenchwoman who stepped up and produced her best when it really mattered.

The two-time French Open champion served superbly in the opening set. She lost just five points during five of the most comfortable holds of her career and got the solitary break she needed in the second game.

Garcia made sure the second set was entirely different. She attacked Sharapova’s second serve and went toe-to-toe with the Russian throughout.

The Frenchwoman broke to lead 4-2, but the former World No.1 hit back straight away and almost won three games in a row. However, Garcia expertly saved two break points in game nine.

Perhaps inevitably, this very close set was decided by a tie-break. And the World No.7 looked set to win it comfortably when she raced into a 6-3 lead.

Sharapova then fought back to 6-all and sensed a chance to seal a straight-sets victory. But Garcia snuffed out her hopes with a big serve and a precise backhand winner to take it 8-6. 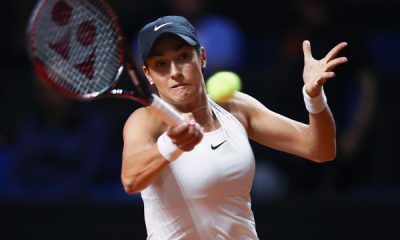 The decider was also close and it was still hard to predict what would happen at 4-all. The Frenchwoman stepped up and provided the answer by punishing some weak serving from the Russian. After securing the break, she clung on to her serve to seal the win.

It was Garcia’s first-ever victory over Sharapova and she celebrated gleefully. She lost to the Russian at the French Open in 2011, Doha in 2013, Brisbane in 2014 and Madrid in 2015.

“It was a very close match, as I expected,” said Garcia in her on-court interview. “I know she’s a fighter, so until the end it will be very difficult.”

“I was a little bit more aggressive today and I returned a little bit better and finally I can say, after seven years, that I beat her.”

Garcia believes her consistency helped her win today. She said, “Sometimes you react to the ball when it comes fast and you hit harder but sometimes you have to think a little bit more and play with more accuracy and that’s what I did well in the last couple of games.”

The Frenchwoman was asked what it was like playing Sharapova for the first time at Roland Garros in 2011 when she was just 17.

She said, “She really plays every single point 100%. So even when I was up, I got a bit stressed. It was my first match on a big court and she had the experience with her, so then I didn’t win any more games. It was not a very good experience for me, so it’s definitely a very important win today.” 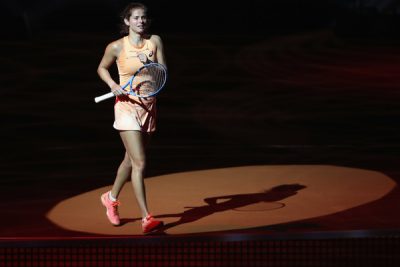 Julia Goerges produced one of her worst performances of 2018 as she was hammered 6-2 6-2 by World No.73 Marketa Vondrousova.

In front of an increasingly stunned home crowd, the German seemed unable to defend her second serve and failed to earn a break point in the match.

This enabled talented youngster Vondrousova, 18, to break Goerges twice in each set and wrap up a remarkably simple victory in just 68 minutes. She will play Elina Svitolina in round two.

The American veteran ends 2020 with just one recorded win on the WTA Tour in eight tournaments played. 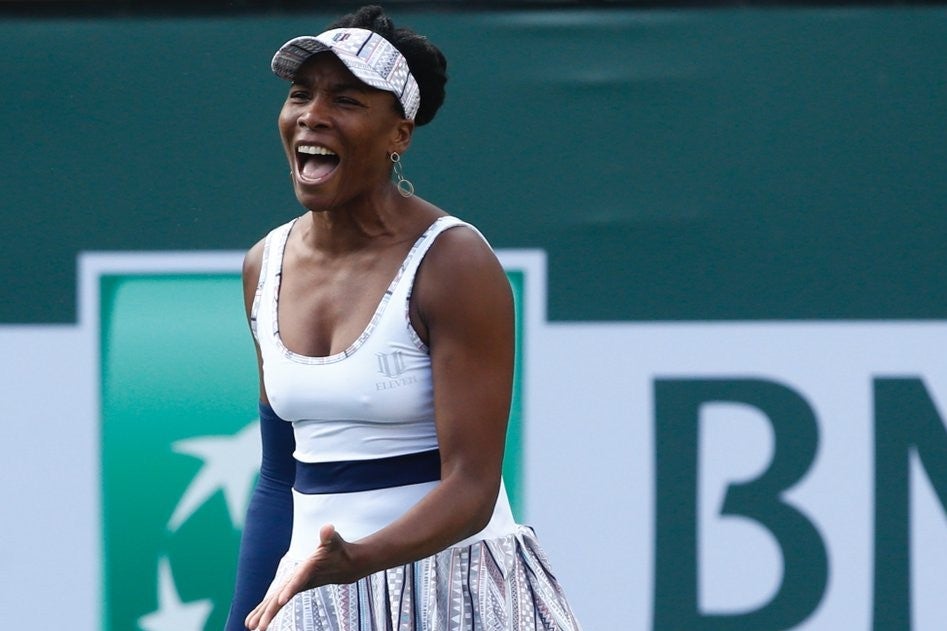 Former world No.1 Venus Williams says she will not play another tournament this year after crashing out of the French Open.

The 40-year-old slumped to a 6-4, 6-4, loss against Anna Karolína Schmiedlová who is currently ranked almost 100 places lower than her in the WTA rankings. Williams struggled to find consistency in her serve throughout and was unusually broken six times in a row between the first and second sets. A former finalist back in 2002 it is the third year in a row where the American has fallen at the first hurdle in Paris.

“It’s been a very long year of quarantine. Now I’ll get to rest. So I’m looking forward to that,” Williams told reporters.

Williams will be eager to forget 2020 and not just because of the COVID-19 pandemic which caused the sport to pause for months earlier this year. On the Tour she played in eight tournaments with her sole victory being against Victoria Azarenka at the Top Seed Open last month. Making it by far her worst season on the Tour. When asked if she plans to play anywhere else after the French Open, Williams stated that she has no intentions to do so.

“I’m going home from here. I’m done. If there is somewhere to play, I won’t be there,” she said.
“Being separated from the people you love probably is the challenging part (of 2020). Obviously not being able to be on tour is also a challenge and not having the fans is pretty rough, also.”

Despite a dip in results in recent times, the five-time Grand Slam champion says she isn’t ready to hang up her racket just yet. Williams is currently the second oldest player to have a WTA ranking and oldest to be inside the top 400. When she made her French Open debut in 1997 Schmiedlová was only two-years-old.

“I just stepped off the court. So even though it hasn’t been a ton of tournaments, it’s still been a very long year. I’m not looking forward to it (2021) yet,” she concluded.

Meanwhile, Schmiedlová faces a tough test in the next round when she takes on 10th seed Victoria Azarenka who has defeated five top 20 players in her 15 most recent matches. It will be the first ever Tour meeting between the two.

The world No.2 reacts to her opening win at Roland Garros.

The clay court major has had its first controversy less than an hour after getting underway. 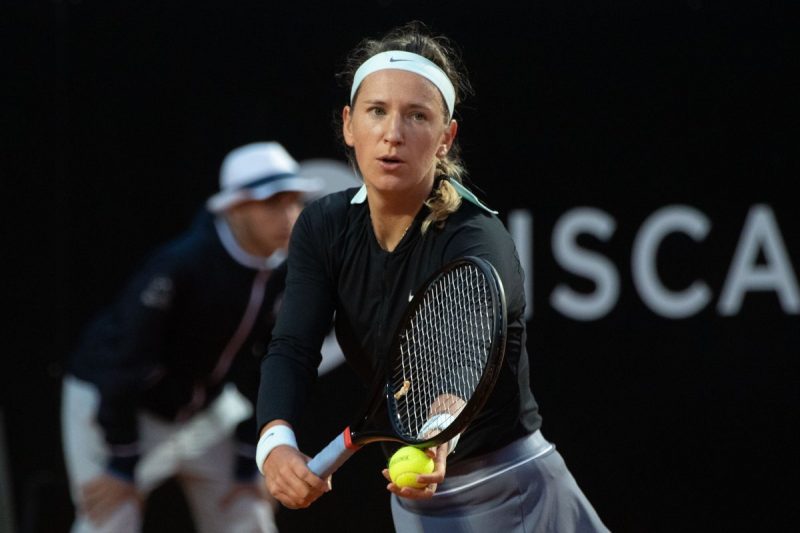 Former world No.1 Victoria Azarenka has voiced her anger at French Open officials as her first round match came to a halt after just three games played.

The 10th seed entered the Suzanne Lenglen wearing a coat as the rain fell steadily on what was also a cold and windy day. From the onset both Azarenka and her opponent, Danka Kovinić, struggled on court with the conditions. After three holds of serves Azarenka demanded to speak with the tournament supervisor as the rain got harder but the umpire didn’t stop the match.

“You guys are not playing so you have no idea what the conditions are. I’m down to play whatever but this is getting ridiculous,” she said to tournament official Claire Wood.

Wood, who was waiting for further instruction from the tournament referee, pleaded with Azarenka to wait a bit longer on the court to see if the rain would pass. However the two-time Australian Open champion was having none of it.

“I’m not sitting here because I am going to get frozen. It’s eight degrees, I live in Florida and I am used to hot weather,” she complained.

Continuing to voice her anger, Azarenka then asked Kovinic if she was happy sitting on the court and awaiting further instruction in which the Montenegrin replied ‘no.’ Resulting in both players walking off before they were technically allowed to do so. Although it is unlikely that such an action would result in either of them getting disqualified with the argument being remaining on the court posed an injury risk.

Due to the COVID-19 pandemic this year’s French Open has been moved from the end of May until now. The weather forecast for the coming days consists of intermittent rain showers with Court Phillipe Chartier being the only one to have a roof.