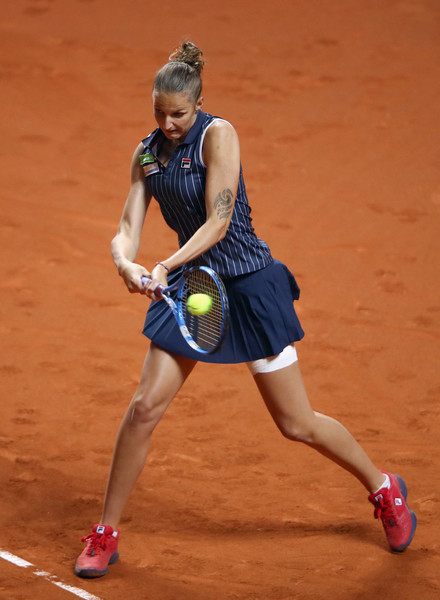 World number 6 Karolina Pliskova cruised past this year’s Charleston champion and world number 26 Kiki Bertens 6-2 6-2 to reach the second round at the Porsche Tennis Grand Prix at the Porsche Arena in Stuttgart.

Pliskova got an early break at love and held serve easily. Bertens got her first game on the scoreboard, but Pliskova fended off three break points before serving out to clinch the first set 6-2 after 25 minutes.

“The serve is the biggest key of the game. When it’s working, it’s much easier from me, but I have had matches when the serve has not worked and I have still won, but it’s much easier when I can hit a few aces in every match”, said Pliskova.

Bertens served better in the first four games of the second set, but Pliskova broke serve in the fifth game to take a 3-2 lead. The Czech star went up a double break to race out to a 5-2 lead, as Bertens made three unforced errors, and served out for the match in the next game to book her spot in the second round, where she will face either Carla Suarez Navarro or qualifier Veronika Kudemertova.

Pliskova was familiar with the indoor clay court of the Stuttgart Porsche Arena, as she played there at last weekend’s Fed Cup semifinal against Germany.

“I have been here for a week, so I know this stadium very well. I feel great today. I know she can play a bit better than that, but it doesn’t matter for me. I think this is the fastest clay I have played on, so it’s not not really behaving like a clay court outdoors. So for me, the conditions can be perfect”, Pliskova.

Maria Sharapova Knocked Out By Garcia In Stuttgart