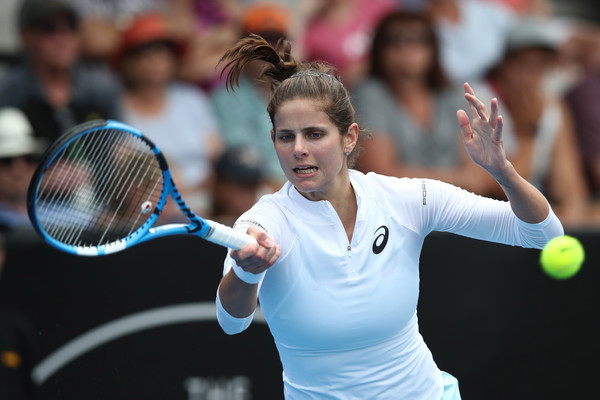 Julia Goerges will contest her fifth Premier final in Charleston after producing a solid performance to beat Anastasija Sevastova 7-6 6-3.

The German, who has already won three Premier titles, looked uncomfortable under grey skies yesterday before the match was suspended at 4-4.

She should have been broken on three occasions as she faced an incredible 11 break points in four games but somehow managed to leave the court level with the Latvian.

Goerges seemed much happier today when the match resumed, and both she and Sevastova twice held comfortably to take the first set into a tie-break.

The German, 29, hit a delightful volley, three big serves and a good smash to storm into a 6-1 lead. Her Latvian opponent then saved four set points thanks to two superb forehand winners and two errors from Goerges.

However, Sevastova undid her good work when she rolled in a feeble first serve on the fifth set point and the German pounced on it with a backhand winner down the line.

Four of the first five games of the second set went to deuce but neither player managed to break. However, the Latvian really seemed to struggle with her heavily-strapped right thigh in game six.

First, Sevastova made an error, and then Goerges hit a stunning short-angle backhand winner. On the next point, the German hit a backhand down the line and the Latvian did not even chase it.

The World No.16 fought back to deuce with some aggressive ball-striking. However, she hit a forehand long to gift Goerges another break point, and then hit a forehand just wide to surrender her serve.

The final three games of the match were close, but the German did what she needed to and hung onto her serve twice to clinch victory.

“I’m super-excited (to be in the final)” said Goerges in her on-court interview. “But I shouldn’t be too excited because there is another match to come and it’s my last one here in the US for quite a while.”

Pasta And Preparation: Roger Federer Reveals His Secret For A Balanced Diet