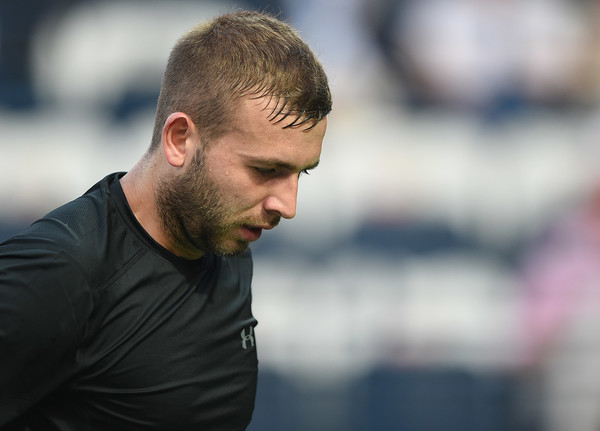 Dan Evans will return to the tour at a Challenger tournament in Glasgow after receiving a wildcard from the British LTA.

The former world No.41 has been suspended from the tour since June after serving a 12-month doping ban. During last year’s Barcelona Open he tested positive for cocaine in a out-of-competition test. He received a more lenient sentence after the ITF accepted that he inadvertently got the substance in his system. Evans said he had accidently mixed some ‘leftover cocaine’ in his wash bag with other medication. He was also forced to pay back £92,205 in prize money.

‘I want to thank everyone who has supported me throughout this difficult period,’ Evans said in a statement.
‘I have learned a lot about myself in my time away from the game, a sport that I love very dearly.
‘I am now committed to training hard, resuming my career and getting back to where I was, although appreciate this will take time.
‘If there is a lesson to be learned here it’s that it is every athlete’s responsibility for what they put into their bodies.’

Evans’ pass into the upcoming event was granted after he met a series of guidelines set out by the LTA. This includes showing a ‘general commitment’ to the sport,’ passing a series of agreed checks over the last six weeks and joining an anti-doping campaign.

“He has passed our agreed checks over the last six weeks.” Said LTA Performance director Simon Timson. “‘[Dan] has begun to support the development of the LTA’s anti-doping.”

The public declaration of the reason why Evans received a wildcard comes as no surprise. Last year a row erupted over the ethics of handing a player a pass into the tournament following a drugs ban. Triggered by Maria Sharapova and her return from a 15-month suspension.

A former British No.2, 27-year-old Evans has been has been previously criticised over his commitment to the sport during his career. Nevertheless, the Birmingham-based player is regarded as one of the most talented in his country. Recording wins over players such as Marin Cilic and Dominic Thiem.

Three months prior to his failed drugs test, Evans reached his first ATP final in Sydney. Losing in straight sets to Gilles Muller. Following on from that, he also made the fourth round of the Australian Open. His best performance in a grand slam tournament to date.

The Glasgow challenger will get underway on April 30th at the Scotstoun Leisure Centre. It will be an Evans’ first tour event since the Surbiton Open.