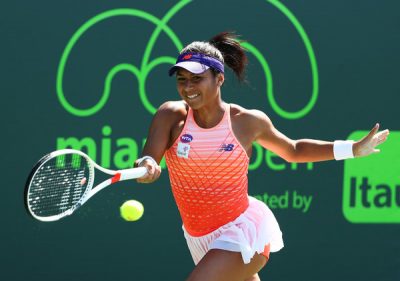 Heather Watson’s poor run of form continued at the Miami Open as she lost 7-6(3) 6-2 to Beatriz Haddad Maia in the first round at Crandon Park.

It was the Briton’s sixth consecutive WTA tour loss since she reached the semi-final of the Hobart International in the second week of January. It was also her second loss to Haddad Maia within a month after the Brazilian beat her in three sets in Acapulco.

Watson competed well to begin during a closely-fought opening set which saw both players hold in their first four service games. The Briton then broke in the ninth by hitting a lot of balls deep into the court and drawing errors from Haddad Maia’s racket.

However, she was unable to serve out the set as the Brazilian found her rhythm from the back of the court and unleashed several powerful strikes to break straight back.

The set remained tight until the tie-break, when Haddad Maia took control to win it 7-3. Watson seemed demoralised after that, and the Brazilian found it much easier in the second set as she served well and broke twice to win it 6-2.

Haddad Maia will now face Zhang Shuai in round two and, if she can reproduce the impressive form she showed on serve against Watson (she made 63% of her first serves and won 89% of points behind them), she will give herself a great chance of victory.

While it was a disappointing loss for Watson, she can take heart from a good showing in Hobart, two Fed Cup wins in February and her current world ranking of 69, which is 39 places higher than she was at the same stage last year.
However, the Briton has a lot of points to defend at Eastbourne and Wimbledon after producing superb tennis on grass last year and will need to rediscover her form before then.

Elsewhere in the draw, Ajla Tomljanovic set up a second-round meeting with Sloane Stephens by triumphing 6-3 4-6 7-5 in a close encounter with Lesia Tsurenko.

Johanna Larsson overcame Katerina Siniakova 4-6 7-6(5) 7-5 in a gruelling match that lasted three hours and seven minutes and will now face Angelique Kerber in round two.

Aliaksandra Sasnovich continued her impressive start to 2018 by beating Krystyna Pliskova 1-6 7-6(5) 7-5, Christina McHale benefitted from Kaia Kanepi’s retirement to advance, and Amanda Anisimova, 16, recovered after twisting her ankle to back up her impressive run to the fourth round in Indian Wells with a 6-3 1-6 6-2 win over Wang Qiang.

Mixed fortunes for Brits in Qualifying

Katie Boulter, 21, is celebrating a place in the main draw and a career-high ranking of 189 after making it through qualifying. First, she beat American Taylor Townsend 7-6(1) 6-2 and then she came back from a set down to overcome Carol Zhao 3-6 7-6(1) 6-2.

But it was an unhappy process for Naomi Broady, who lost 4-6 7-5 6-3 to Oceane Dodin, who was then forced to withdraw from her second qualifying round match the following day.

Garbine Muguruza Confident Of Regaining Form After Mixed Start To 2018