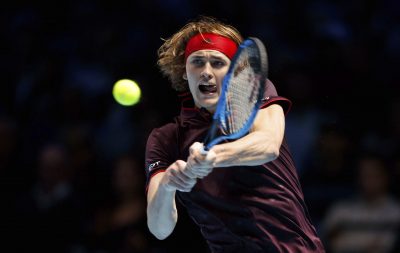 World No. 3 Alexander Zverev will face Paris Masters champion Jack Sock in a high-voltage encounter at the ATP World Tour Finals in London on Thursday. For the victor, a spot in the last 4: For the loser, a flight back home.

Undoubtedly, rising German Zverev is the guy everyone is talking about in the British capital as after the exit of the top seeded Rafael Nadal, he is the second favorite behind Roger Federer to win the tournament. Not just that, everyone is discussing the 20-year-old’s remarkable rise in the ATP rankings and the big game he possesses. The pundits, the ex-players and even the greats Federer and Nadal have tipped him to become the next No. 1 and a multiple Grand Slam champion.

He has definitely proven them right so far as he has already won five titles in 2017. Those trophies have included a couple of high-profile tournament victories – the Rome Masters crown over Novak Djokovic and the Canadian Open title triumph over Federer. And, regardless of a lackluster run since the US Open, he was successful in qualifying for the prestigious season ending finale at the O2 Arena.

Zverev began his campaign in the event with a tight three-set win over Marin Cilic and then lost the following match to Federer to put himself in a difficult spot as a lose to Sock will mean the end of his season.

Unlike Zverev, Sock was a late bloomer as until late October his qualification for the tourney was in serious doubt as he was way behind in the points race and there were a couple of players who were ahead of him in that regard. But, all that changed as soon as he took advantage of a depleted field to accomplish the biggest title win of his career in Paris.

With Federer resting his back and Nadal pulling out after playing just two matches, it was Sock who blossomed as he outsmarted, outclassed and outmuscled his weak opponents to seal his place in London. Upon his arrival there, Sock showcased all his skills as he gave a tough test to Federer before eventually losing the match in two close sets. However, the American played brilliantly against Cilic especially when it mattered the most in the decider as he clawed his way back from a break down to complete a 5-7, 6-2, 7-6 win.

Head-to-head: Zverev and Sock have met each other twice before on the ATP tour with the pair trading wins in Beijing and Stockholm in 2016. While Zverev is more of a complete package, Sock is slightly more confident of the two right now as he has won far more matches than the German in recent times. Still, we should expect this match to go down the wire as both the players will give their all to advance through to their maiden ATP Finals semifinal.

ATP Finals hit by another withdrawal, alternates brought up