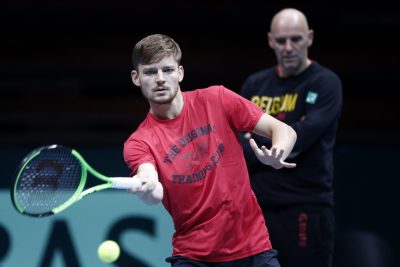 ATP Finals runner-up David Goffin will face World No. 18 Lucas Pouille in the opening singles rubber of the Davis Cup final on Friday. Can Goffin lead Belgium to their first ever Davis Cup title triumph or will France’s superior squad lead the host nation to their 10th victory in the prestigious event?

Goffin and Pouille’s great friendship will be put to an enormous test this afternoon when they will square-off to claim the biggest prize of their respective careers. Goffin, who has lost to Pouille on all three occasions in the past on the ATP tour, is the main man standing between Davis Cup glory and France.

While acknowledging his past struggles against Pouille, Goffin also appeared confident of overturning the tide in his favor this time around. Speaking to the media on the eve of the tie, Goffin said: “We’re friends and I’m sure we’ll be friends after the match as well. I’ve never beaten Lucas so I will try to find a solution to find my best tennis.”

“I’m happy to start the first match again,” Goffin added. “I spoke with Steve (Darcis) beforehand and he preferred that I start and he played second. It won’t be easy, two years ago I played first in the final and I was tired. This time I will try to be a little more relaxed and play as good match as I can from the start.”

Goffin has been simply sensational not just on the ATP circuit, becoming only the sixth player ever to beat Roger Federer and Rafael Nadal in the same tournament, but has been outstanding in Davis Cup play as well, compiling an impressive 4-0 win/loss record. However, without his compatriot Steve Darcis it wouldn’t have been possible for Belgium to make it this far in the esteemed team competition.

With Goffin unavailable in their first-round tie against Germany, Darcis stunned the tennis world with his twin victories over Philipp Kohlschreiber and Alexander Zverev as Belgium secured a seemingly unlikely win. Since then he has accumulated an excellent 4-1 record in 2017, stretching his overall record to 22-9 in Davis Cup play.

Meanwhile, France has advanced to the tournament finals on the back of the depth in their squad. With the likes of Jo-Wilfried Tsonga, Richard Gasquet, Pouille, Jeremy Chardy and Gilles Simon all playing at some point in the tourney, it allowed the Yannick Noah led side to overcome the stiff challenge, especially from Serbia when Dusan Lajovic claimed an upset victory over Pouille in their opening rubber, before Tsonga came to their rescue by winning both his singles rubbers.

Heading into the final against Belgium, there was a lot of talk about massive changes in the French squad before Noah ended all speculation by selecting Gasquet as his other singles player who will compete against Darcis in the second singles rubber. Even though, the head-to-head between the two players is tied at one-all, French captain Noah sounded confident about his decision to select Gasquet for the crucial tie. Noah said: “Today I decided to choose the two best singles players and the two best doubles players. I think (Gasquet and Herbert) have a game that compliments each other very well.

In Davis Cup play, France has a slight edge over Belgium with their superior 4-3 head-to-head record against them, including victories in a World Group semifinal in 1999 and an opening round tie in 2001. However, tennis is all about the momentum and at the present juncture, Belgium has the momentum with Goffin playing the best tennis of his career. He would also want to shrug off the disappointment of losing out on the ATP Finals trophy by capturing a maiden Davis Cup title for his country.

I expect greatness from Djokovic, Murray and Wawrinka: Federer