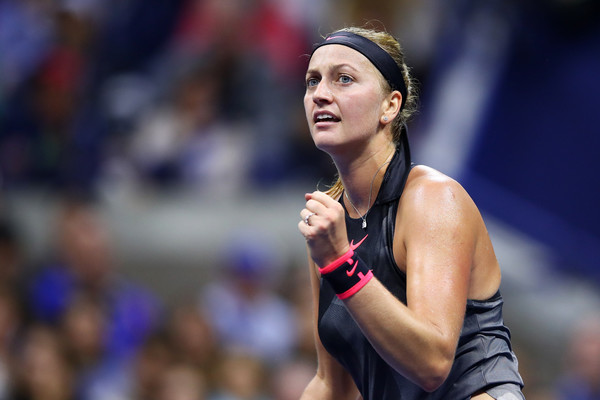 Two-time Wimbledon champion Petra Kvitova showcased her vintage form on the big stage in the Arthur Ashe Stadium, by ousting fellow two-time Grand Slam champion Garbine Muguruza, 7-6(3), 6-3 to reach her second US Open quarter-final in three years, where she will face another multiple Grand Slam champion in Venus Williams for a place in the semifinals on Tuesday.

Kvitova denied the third seed the chance to complete her set of reaching the quarterfinals at all four Grand Slams, and in the process, she helps her compatriot and reigning world number one Karolina Pliskova, in having a chance of retaining the world number one ranking. However, Muguruza is in pole position to take it but Pliskova will need to reach the final again, and Svitolina could have a chance to claim it, should she reach the semifinals.

Kvitova storms back to take the opening set

The two multiple-time Grand Slam champions both held their serve with ease to get this intriguing fourth round encounter under the lights inside the Arthur Ashe Stadium underway. However, the reigning Wimbledon champion, seeded third at this year’s US Open drew first blood as she broke the 13th seeded Czech’s serve with a helping hand from Kvitova, who was committing unforced errors, and a double fault, which handed the Spaniard a 3-1 lead.

Kvitova was struggling to settle into this match in the early goings as Muguruza consolidated the break and extended the lead to 4-1. However, the two-time Wimbledon champion raced out to a 40-0 lead on her serve but she had to face three break points. Nevertheless, the Czech fended them all off and clinched the game with a scorching forehand winner down the line to ensure the break was a single one.

It proved to be the turning point of the opening set as the third seed could have served out for the first set but she was unable to capitalize on it as Kvitova raised her level once more as she reduced the arrears to 4-3.

Muguruza was under severe pressure in the first set as she had to fend off break points in her next two service games but the hard-hitting Czech was rewarded with her persistence, and going for her shots as she broke Muguruza’s serve to go for a break up and lead 6-5. 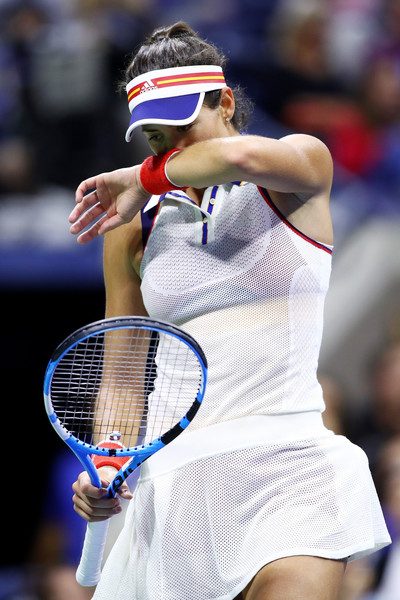 It was a tough day at the office for Muguruza, who started off strong (Photo by Clive Brunskill / Getty)

However, the former world number two was unable to close out the first set on her serve as she committed a double fault, and sent the first set to a tiebreak.

The reigning Wimbledon champion, who won Roland Garros last year to claim her maiden Grand Slam singles title got off to a good start in the tiebreak to lead 2-0. Unfortunately, for the Spaniard, she gifted the mini break straight back to Kvitova, who was an imposing figure in the box, creating a forehand winner down the line to restore parity at 2-2.

The errors continued to spray from the tournament favorite’s racquet and she committed an untimely double fault to handed Kvitova, three break points at 6-3. The Czech number two made no mistake by producing a smash winner at the net, 7-6(3) in one hour and four minutes, half way to the biggest winning in her comeback.

Kvitova books her place in a second Flushing Meadows quarterfinal

Muguruza got off to a bright start in the second set as she immediately broke Kvitova’s serve who was bitterly disappointed. However, the Czech broke back instantly to love, leveling the second set at 1-1. The Wimbledon champion’s forehand was not working, and Kvitova continued to target her forehand, with a hold to love, taking a 2-1 lead.

The two-time Grand Slam champion’s backhand started to let her down, and her backhand sprayed wide out of the tramlines handed Kvitova, her third successive game, with a 3-1 advantage, which was crucial and changed the dynamics of this match.

Muguruza’s coach Sam Sumyk was coaching from the box, which is permitted at Grand Slam’s and Muguruza gained a warning for it. Nevertheless, the 2011 and 2014 Wimbledon champion had locked the big-hitting Spaniard in a vice grip as she took a 4-1 lead in the second set.

Both players would continue to hold onto their serves but Muguruza who is in pole position to clinch the world number one ranking next Monday unless Elina Svitolina reaches the semi finals or Pliskova reaches the final once again will ensure that Muguruza will have to wait. Kvitova brought up her first match point on the Spaniard’s serve but Kvitova committed errors which let the Spaniard off the hook temporarily, trailing 3-5. 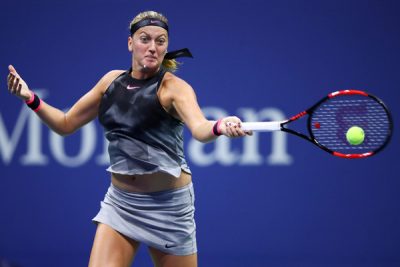 The crowd was willing Kvitova on but it was far from easy as the former French Open champion created four break points in total, and has Muguruza broke back, the complexion of the match would have changed once more. Nevertheless, the dual Wimbledon champion’s serve came to her rescue, and she scored a huge victory over the in-form Cincinnati champion Muguruza, 7-6(3), 6-3 in one hour and 45 minutes.

The Czech was pleased to play back on the big stage. “A lot, it was good to play on the big stage, in my recovery, I was working hard to play here again, my team is always supporting me all of the time, I’m really glad that I have them, it means a lot, it’s an incredible night to play in front of a great crowd.”

“I don’t think I can find the right words, five months it was tough, it was a journey that I didn’t know it would end if it’s at this stage it’s a happy end.

The former world number two was asked about her expectations of winning the title, “I have no idea, I came here without any expectations, if I can improve my serve, it would be better than today, better chances, I don’t know, I don’t have any goals or anything, I’m going to try to be aggressive.”