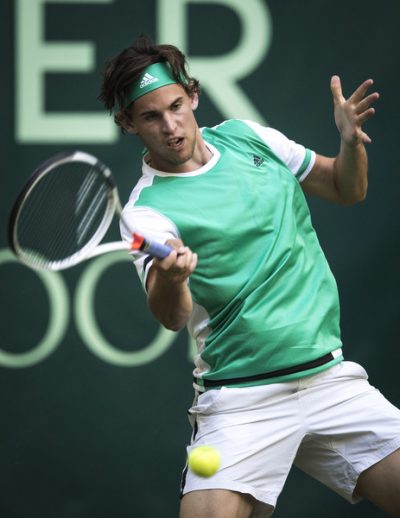 Dominic Thiem’s hopes of a first grand slam were took a massive setback as he was eliminated by world number 222 Ramkumar Ramanathan 6-3 6-2.

The Indian, who served 63% of first serves in went on the offense from the start of the match and broke for a 2-0 lead. Thiem couldn’t create any pressure as Ramanathan wrapped up the first set 6-3 in 30 minutes. The Austrian, who is the eight seed for Wimbledon next week failed to ramp up the pressure on his lower ranked opponent. Another two breaks in the second set was enough to seal the best win of Ramanathan’s career, 6-3 6-2 in just over an hour. A dejected Thiem will enter Wimbledon with a lack of match practice on the grass as he has only managed to play three matches in two weeks on the grass.

However it is the best win of Ramanathan’s career and he is rewarded by booking his place in the quarter-finals in Antalya, where he will grass court veteran Marcos Baghdatis. The Cypriot grinded out a tough 6-4 3-6 7-5 win over Carlos Berlocq. Despite saving eight break points, Berlocq failed to save three break points as he fell to a ahrd fought defeat in 2 hours and 20 minutes. Other second round results today saw Adrian Mannarino secure a 6-4 6-4 victory over Egyptian qualifier Mohamed Safwat. The Frenchman broke twice to complete a very good victory. He will now play third seed Fernando Verdasco who defeated Belgium’s Steve Darcis 6-3 6-4.

Here are some first round results, in which Daniel Altmaier secured his very first victory on the ATP World Tour and Poland’s Kamil Majchrzak was very unlucky to not have come away with a set against Andreas Seppi

Past And Present Players Tip Roger Federer For Wimbledon Glory, But He Remains Cautious