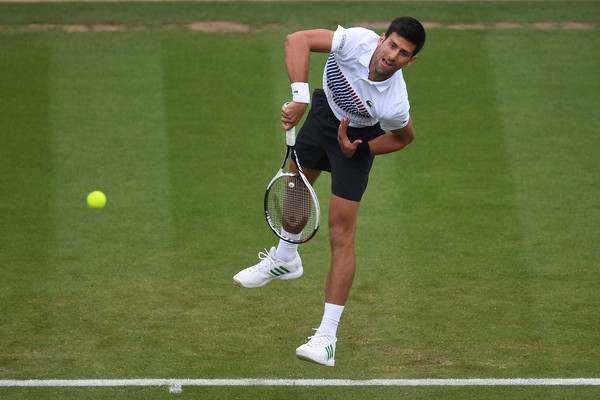 Novak Djokovic ensured that his first visit to Eastbourne was not a fleeting one as he booked his place in the quarterfinals at the Aegon International with a straight sets victory over Vasek Pospisil 6-4, 6-3.

In a very entertaining contest full of great shot making there was little to separate the two players in the first set. Top seed Djokovic raised his level at the crucial moment to secure a break at the end of the set to take control and fought off a break point early in the second before responding to close out the match in straight sets.

Djokovic led their head to head 4-0, winning their last meeting in 2016 at the Shanghai Masters 6-4, 6-4, but this was to be their first meeting on grass. With the Serb playing his first competitive match on grass this year in his first Wimbledon warm-up event since 2010, combined with going up against a former quarterfinalist at SW19, this had danger signs written all over for the 12-time Grand Slam champion. The world number four made sure that any talks of an upset were quickly quashed.

The match was due to be played on Tuesday as the first match on Centre Court, but due to the awful weather on the south coast with torrential rain spells occurring throughout, play was called off for the whole day, with Djokovic leading 1-0, 15-30 on Pospisil’s serve.

On Tuesday in their brief eight and a half minute first act of this second round match the top seed had to save two break points. Nearly 24 hours on Pospisil had to face a break point on his own serve. The Canadian hammered down an ace out wide to recover to deuce before going on to hold in a tough first game of the day.

Both players had half a chance on their opponent’s serve at 30-30 over the course of the set, but neither player could ask the question and bring up a break point opportunity. That was until the 10th game when the world number four struck three exceptional return of serves from the deuce court to help bring up set point. Pospisil, currently ranked at 75 in the world, kept his first set hopes alive with a powerful unreturned serve. With the Canadian winning just 41% of points behind his second serve it proved to be his downfall, with two forehand errors following to seal the set for Djokovic 6-4 after 47 minutes of play.

It became evident over the course of the match, mostly through Pospisil’s body language that he truly believed he could win this match despite never taking a set off the former world number one. The Canadian had a look in two of Djokovic’s opening three service games and in the fifth game had a break point opportunity. In an extended rally the world number 75 thumped a forehand down the line over the high part of the net, but it happened to be right at the top seed, allowing him to block the return and put it back into court. With Pospisil then on the chase he was able to put the ball back over the net but the Serb was there to pass him with the backhand to save the break point before holding serve to stay in front.

That missed opportunity proved to be a turning point as Djokovic turned up the heat on his returns of serve, forcing the Canadian onto the back foot as he brought up two break points. A backhand dumped into the net from Pospisil resulted in his racket being thrown to the floor and an expletive from the Canadian as his frustration and disappointment grew. The former Wimbledon quarterfinalist tried to channel that anger in the following game to try and break back, but it was to no avail.

Pospisil forced the top seed to serve out the match and the Canadian gave the crowd plenty to smile and cheer about with some of his shot making as he saved a match point. Unfortunately for the world number 75 he could not prolong the contest for the captivated Eastbourne crowd, as the top seed secured his first win at the Aegon International 6-4, 6-3 to advance to the quarterfinals. Next up for the three time Wimbledon champion, either Donald Young or Jared Donaldson.