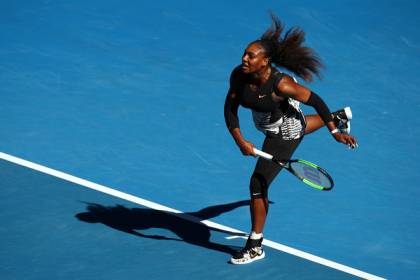 Serena Williams is one win away from regaining the world number one spot after beating Mirijana Lucic-Baroni 6-2 6-1 in 52 minutes to reach her 29th grand slam final.

Heading into this match Serena was clear favourite to make her 29th grand slam final and boasting a 2-0 lead against her opponent in their head to head series, both meetings were in 1998. Her favourite status proved evident right from the start as she dominated from the baseline as she broke a tired Lucic-Baroni in the third game for a 2-1 lead. The American won 92% of first service points, as she used here big first serve to dictate play, as the Croatian giant killer felt powerless. Serena once again broke in the sixth game as she sealed the first set 6-2.

The second set proved no different for the 22 grand slam champion as she continued to impose her dominance on court. She used her powerful ground strokes as well as moving sublimely across court, as she broke for a 2-1 lead. Lucic-Baroni looked exhausted and had no energy to amount any offence to Serena as the last couple of upsets had taken its toll on the Croatian. The former world number one, who has the chance to win it back by winning the title in Melbourne, continued to mount pressure on her opponent and once again broke for a 4-1 lead. The win was inevitable and on her first match point Serena sealed the victory 6-2 6-1 in 52 minutes.

Serena Williams was once again dominant beating Lucic-Baroni in impressive style. For the Croatian she has had an amazing two weeks in Melbourne beating the likes of Agnieszka Radwanska and Karolina Pliskova to reach her first grand slam semifinal since 1999. So Serena Williams will play her sister Venus Williams for a chance to win her 23rd grand slam title and to regain her world number one spot. You couldn’t of wrote a better script, could you? The final takes place on Saturday.

Grigor Dimitrov Gave Nadal All He Could Handle