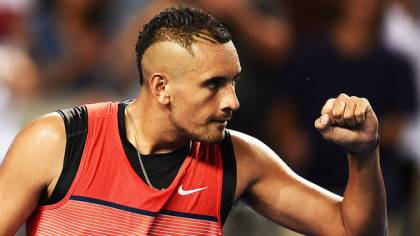 The pair had only played once before in the second round of the French Open three years ago where Cilic unsurprisingly won in straight sets. However, this final was set out to be a tight affair, with the two big-serving giants over 6 ft. 4, and the fast indoor conditions at Marseille, it was bound tobe a contest heavily reliant on serve.

The promising Aussie was full of confidence coming into this final, following a destructive performance defeating world number 8, Tomas Berdych in just over an hour in yesterday’s semi-final. Kyrgios started off strong as ever and had the opportunity to put himself in front from the very beginning of the match, forcing Cilic to have to save 7 break points in only his first two service games, which no doubt put the Croatian on the back foot from the very start. With increasing pressure, it was only a matter of time before Kyrgios was going to break and on his 8th break point he capitalised with a stunning forehand winner down the line.

The young Australian was simply unforgiving on Cilic’s second serve who could only win 39% of these and with a restless attack and often taking the second serves absurdly early only a couple steps behind the service line, Kyrgios broke again and took the first set 6-2 in 34 minutes.

Kyrgios, who against Berdych won 94% of first serve points and never once faced a break point against him in the whole match, was just as ruthless on serve today, which led both Berdych and Cilic to a serious and notable frustration.

At 5-4 in the second set, for the first time in the match, Cilic found himself with a break and set point (30-40) with a fabulously constructed point off Kyrgios’ second serve, which he celebrated with a vivid uproar. But Kyrgios saved it in a blink of an eye with what less surprising than his 12th ace of the game. And that was the closest Marin Cilic ever got to break the powerful Aussie.

Serving the way he has this week, and after that well known 4-ace game against Richard Gasquet, just how else would you have expected Nick Kyrgios to close match point? That’s right, it was yet another ace, as he hit his 17th of the match with an out-wide rocket which couldn’t have summarised this performance any more accurately.

The small scare following his prudent withdrawal from Rotterdam last week claiming a dragging elbow injury was still bothering him was not once visible in Marseille as he consecutively dispatched the likes of Gasquet, Berdych and now Cilic.

Kyrgios’ performance this week confirmed why he is a serious contender for achieving the very top of men’s tennis in the near future. The triumph over Cilic has rewarded him with his first ATP title.

Hyeon Chung, Malek Jaziri, Feliciano Lopez and Marcos Baghdatis advance to the second round in Dubai