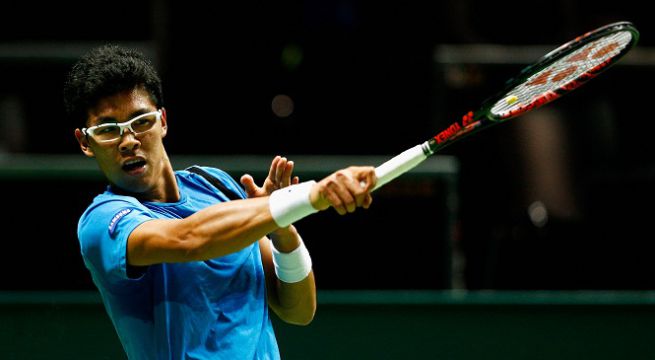 South Korean teenager Hyeon Chung got a break in each set to beat Andreas Seppi 6-3 6-4 in one hour and 17 minutes to advance to the second round of the Dubai Duty Free Tennis Tournament. Chung, who is ranked 27 places lower than Seppi in the ATP Ranking, faced just one break point in the whole match at 2-2 in the first set before breaking in the sixth game. Chung built up a 5-2 lead and served out for the first set in the 9th game. In the second set Chung broke serve in the third game and held his service games until the end of the match. Chung earned three break points but Seppi saved them to hold his serve for 3-2. In the 8th game Chung made a double fault to trail 15-30 but won his service game to open up a 5-3 lead before serving out for the match in the 10th game. Chung dropped just 13 points on serve in the whole match and was solid from the baseline.

Chung will face either Roberto Bautista Agut or Simone Bolelli in the second round.

World number 121 Malek Jaziri from Tunisia beat 2007 and 2010 Dubai finalist Mikhail Youzhny 6-4 6-1. In the first set Jaziri rallied from a break down to get an immediate break-back. The Tunisian player broke serve in the ninth game before serving out for the first set.

Jaziri got a double break in the third game at 1-1 and in the fifth game to build up a 4-1 lead before wrapping up the match on Youzhny’s serve.

Jaziri will face either World Number 1 Novak Djokovic or Tommy Robredo in the second round.

Sixth-seed Feliciano Lopez overcame a second-set loss to edge Guillermo Garcia Lopez 6-1 4-6 6-4 in an all-Spainsh first round match. Feliciano broke serve twice to race out to 5-0 en route to taking a 6-1 win in the first set. Garcia Lopez fought back breaking serve in the 10th game to seal the second set 6-4. Feliciano Lopez broke serve once in the first game of the decider and saved a break point in the 8th game to clinch the 400th win of his career and secure his spot in the second round. Feliciano fended off six of the eight break points he faced and fired 16 aces.

Marcos Baghdatis stunned Viktor Troicki 7-6 (7-2) 6-2 in the final Monday match at the Dubai Duty Free Tennis Championships. Troicki, who won the Sydney title and reached the final in Sofia earlier this year, became the first big name to crash out in this ATP 500 tournament. Troicki broke serve in the fourth game of the first set but the Cypriot fought back to win the first set at the tie-break.

After dominating the tie-break, Baghdatis got the double break in the sixth game as Troicki made a double fault. Baghdatis closed out in the 8th game setting up a second round match against Canadian Vasek Pospisil, who battled past Lucas Pouille 6-3 5-7 6-4 in one hour and 48 minutes.