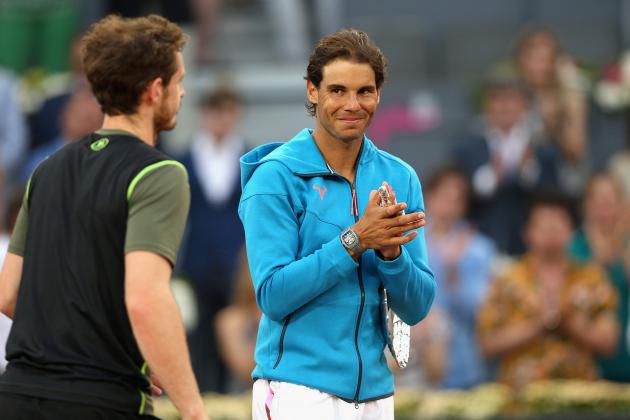 Nine-time French Open champion Rafael Nadal has praised Andy Murray by calling him one of the most talented players that he has ever seen.

Nadal made the comments during an exclusive interview with Sky news reported Jacquie Beltrao. Beltrao visited Nadal in Spain to discuss the development of his new tennis academy. During the interview, he drew similarities between himself and the 2013 Wimbledon champion.

“If I’m playing bad I don’t create stories. Andy is similar. He is fair, he is honest and a very good guy. And at the same time he is one of the most talented players I have ever seen”. He said.

Nadal has played the Brit 21 times in his career and currently leads the head-to-head 15-6. Their last encounter was in the final of the Madrid Open in May where Murray cruised to a 6-2, 6-3, win. It was the first time that Murray has beaten the Spaniard on clay. Nadal also described Murray’s career as ‘amazing’ but added that he should of won more.

“I think he has an amazing career already. He will have had an even better career by the end, but at the same time for his level in general and his opportunities he should have won more.”

So far in Murray’s career, he has won two Grand Slam titles (US Open, 2012 and Wimbledon, 2013), 35 ATP titles and an Olympic gold medal. He also has a chance to claim his first Davis Cup title later this year when Great Britain plays Belgium in November’s final.

Beside praising Murray, the 29-year-old also reflected on his testing 2015 season. Nadal has won three ATP titles this year but has endured disappointment in the higher ranked tournaments. This year was that first time that Nadal hasn’t reached the last four in any Grand Slam since 2004. In June he dropped to 10th in the world which was his lowest ranking position for over ten years.

Nadal openly admitted that he was troubled by tiredness and nerves throughout the first year, which affected his ability to control his emotions. Despite this he retains a positive outlook for the 2016 season.

“The first six months I was feeling very tired every time I was playing, every time I was practising so I feel like something pushed me… nerves and probably the injury of last year produced all these things”. He told Sky News.
“I know it hasn’t been perfect, but it’s very difficult to play well and it’s very difficult to find the right level when you can’t control your emotions… something that I did all my career, so I am starting to control my emotions again more and I really believe I will be ready for next year.”

The ‘King of clay’ will return to action in October at the China Open. The tournament begins on October 5th and will also feature Novak Djokovic, Tomas Berdych and David Ferrer.

Sabine Lisicki ends her season due to injury