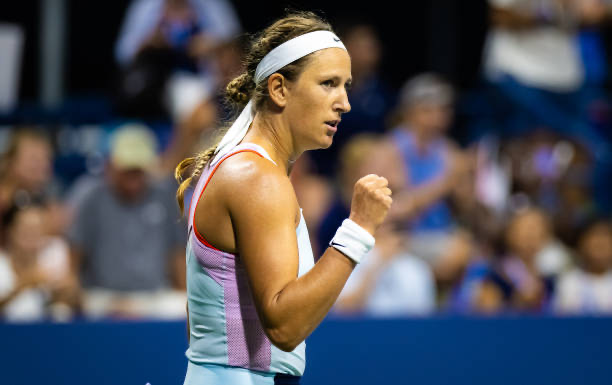 Victoria Azarenka spoke about her approach to talk to the Ukrainian players after Marta Kostyuk refused to shake Azarenka’s hand after their match.

The former Grand Slam champion produced a dominant performance as she claimed victory over Kostyuk 6-2 6-3.

However it was what occurred after the match that took the headlines with their being a long ongoing dispute between Ukrainian and Belarusian and Russian players over their participation on the tour.

Kostyuk in particular has took aim on the WTA and other players on competing with Kostyuk speaking out on Azarenka’s participation in ‘play for peace’ which Azarenka in the end was withdrawn from.

After their match there was no handshake between the two with a racket tap the only way of both players acknowledging each other after the match.

In her post-match press conference Azarenka admitted she wasn’t surprised and said she is opened to listen to the Ukrainian players, “I wasn’t surprised. I don’t believe that making a big deal out of it is important. I always shake hands with my opponents,” Azarenka said.

“I had the same situation with Yastremska in Washington. It is what it is. I just move on. I cannot force anybody to shake my hand. It’s their decision.

“I’ve offered many times through WTA, because I believe that there is a sort of sensitivity. I’ve been told that that’s not a good time. I don’t have, or I never had a close relationship with Marta. I obviously knew who she is, but I’ve never practiced with her. I’ve never really had conversation with her.

“I feel like I’ve had a very clear message from the beginning, is that I’m here to try to help, which I have done a lot. Maybe not something that people see. And that’s not what I do it for. I do it for people who in need, juniors who need clothes, other people who need money or other people who needed transportation or whatever. That’s what is important to me, to help people are in need.

“I’m open to any time to listen, to try to understand, to sympathize. I believe that empathy in the moment like this is really important, which has, again, been my clear message in the beginning.

“I’m going to stand by that, because what’s happening in the world is very difficult right now, but we shouldn’t forget that we are all human and we should treat each other that way.

“To me, I look at her as a tennis player, as a colleague. I know she’s going through a lot of difficult situations. It’s not easy to handle. From, you know, my perspective, I wish she had somebody who guide her a little bit better through this difficult time. So, you know, there is going to be more sympathy from others.

“I feel like when you’re trying to, I don’t know, react, it’s not always received that well. So I’m always open to listen. I can’t force people to do something they don’t want to do. But any time, she has my number, as you know, she texted me, and all others, as well.”

It’s clear that Azarenka feels like she’s done everything she can to deal with the situation.

However Ukrainian players still feel that players like Azarenka should be using stronger words as the war in Ukraine continues.

As for on the court, Azarenka will now take on Petra Martic after the Croatian knocked out fourth seed Paula Badosa in three sets.