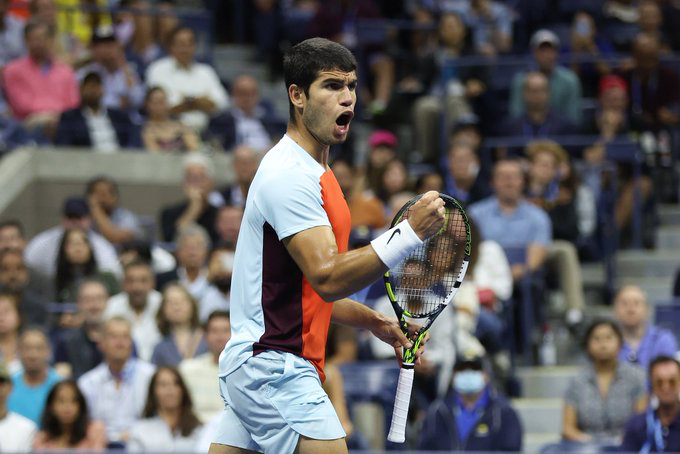 Carlos Alcaraz has praised his mentality and mental toughness after reaching the US Open final.

As a result Alcaraz is now only one win away from his maiden Grand Slam title and becoming the new world number one.

However after the match the Spaniard wasn’t thinking too much about the achievement and wants to stay in the moment, “Well, it’s close. But at the same time is so far away, you know?” Alcaraz said after his semi-final victory.

It has been a remarkable season for Alcaraz which has seen him beat the likes of Novak Djokovic and Rafael Nadal to win his maiden Masters 100 event in Madrid.

As well as that, the Spaniard has also qualified for the Nitto ATP Finals for the first time becoming the youngest player since Rafael Nadal to qualify for the event.

Now Alcaraz has the opportunity to add Grand Slam champion and world number one to those lists of accolades.

The secret behind Alcaraz’s success seems to be the physical and mental improvement as he hinted at in his press conference, “Well, I would say now I’m more prepared,” Alcaraz said.

“Last year I just played three Grand Slams before US Open, and I just play, I’m going to say, one match five sets. Now I’ve played more matches in five sets, I am more prepared mentally and physically, as you said. Yeah, it was 12 months of working hard in the gym, on the court. But I would say it’s all mental.”

It’s clear that Alcaraz’s hard work has paid off as he is now one win away from achieving his childhood dream.

The Spaniard also reflected what he would say to a younger version of him and what his coach Juan Carlos Ferrero has said to him, “Follow his dream. If you work hard, all the hard work, it pays off,” Alcaraz said.

“Right now you can see that all the hard work I put every day is paying off right now. I going to do the same, that is going for it. No matter what I’m fighting for or what I am, I just going for it and enjoy the moment.”

The men’s final against Casper Ruud is set to take place at 9pm BST on Sunday evening.

Casper Ruud reaches his second final in a major