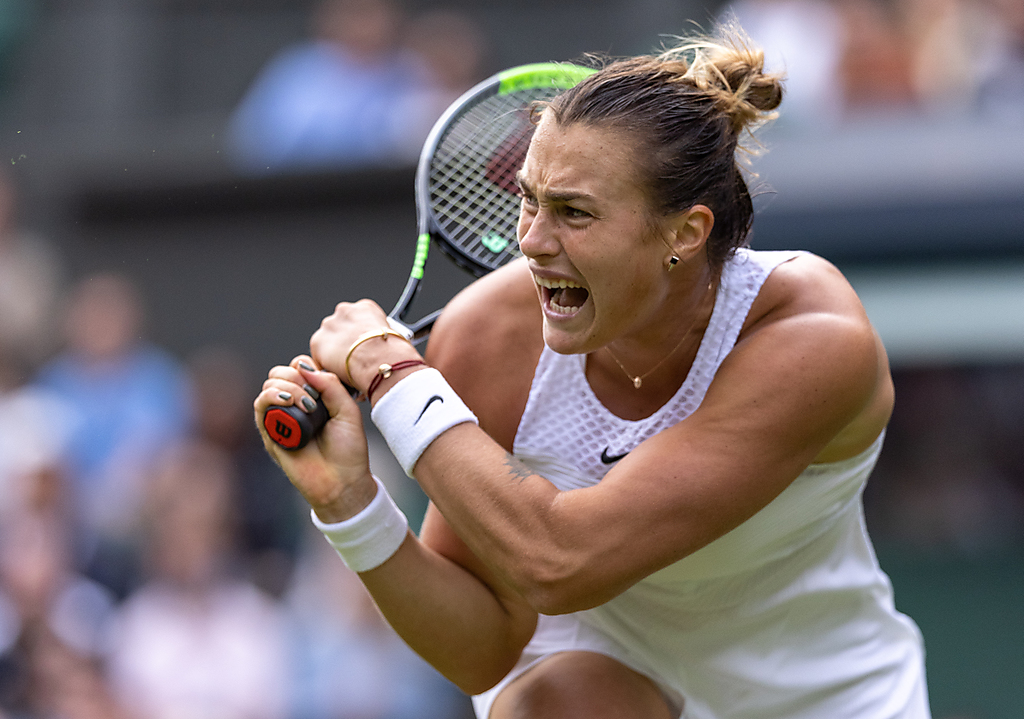 Aryna Sabalenka (BLR) is one of the players banned from Wimbledon and LTA events. (Day 3 Wednesday 30/06/2021. Credit: AELTC/Ian Walton)

The All England Club knew it was going to be a bold move which would divide the tennis world and set them up for a backlash.

On Wednesday, officials confirmed that Russian and Belarusian players will be banned from this year’s Wimbledon Championships as a consequence of the devastating war in Ukraine. The British LTA has also taken the same action on the ground that allowing those players to play ‘risks providing a boost to these regimes when there is an unprecedented international effort to isolate them and sanction their actions.’

The ban is a first in the sport which until now had shown a united front on how they were dealing with the ongoing crises. On March 1st a joint-statement was issued by tennis’ seven governing bodies outlining their approach. Those representing the two countries would no longer be allowed to play under their flag and their federations have been suspended from ITF team events. Wimbledon was one of the bodies who endorsed this decision along with the three other majors, ITF, WTA and ATP.

So the decision by Wimbledon and the LTA to go one step further has been met with heavy criticism from some, including other governing bodies.

“The announcement that came out was extremely disappointing to say the least. The one thing that this sport has agreed upon is that entry into our events, whether it is ITF, WTA, Grand Slams….has always been based on merit and without discrimination. We have never banned athletes because of where they are from or what decisions their government has made,” WTA chairman Steve Simon told The Tennis Podcast.
“We took a position earlier this year that these athletes need to continue to play and not be penalized based upon the actions of their government. We stay strong behind that, it’s a fundamental principle.”

Whilst the ban is viewed as an act of solidarity towards the Ukrainian people, Simon argues that sports and politics should be kept separate. It appears that the ban implemented by both Wimbledon and the LTA now puts them in danger of facing some repercussions. Particularly the LTA as they oversee events run by the WTA and ATP.

“The Wimbledon decision is against the Grand Slam rules, as well as the Grand Slam agreement we (the WTA) have. It’s in violation from our perspective in both of those situations. The LTA has WTA-sanctioned events and the decisions are in violation of WTA by-laws with respect to entry of athletes,” Simon states.
“I do think you will see some strong reactions from us but what they are and how far we will go is still to be determined.”

The WTA could choose to issue fines should they have concrete proof that their agreement has been violated. In extreme cases, they can revoke their license deals with tournaments but there is currently no talk of such a move. This is what happened with China following concerns that Peng Shuai is being censored by authorities accusing an official of sexual assault.

“Entry into Tournaments shall be open to all eligible women tennis players based on merit and without discrimination, subject only to the conditions in the WTA bylaws and these Rules, including but not limited to the Age Eligibility Rules and Gender Participation Policy.”

The same applies to the ATP who said in their statement that the ban is ‘unfair and has the potential to set a damaging precedent for the game.’

In Britain such actions are not unprecedented. One example is that of Motorsport UK who last month banned Russian and Belarusian license holders from racing amid Russia’s invasion of Ukraine. Furthermore, The International Olympic Committee has previously recommended that those athletes be prevented from competing in international events. So in one way the approach taken by Wimbledon and the LTA is not isolated.

However, some view that there are more effective methods which could have been taken instead. Andrey Rublev is one of those players who have been banned. Following his second round win at the Serbian Open on Thursday, the world No.8 said he would have been willing to play Wimbledon on condition that all prize money he makes get donated to humanitarian efforts helping support those affected by the war.

“Banning Russian or Belarusian players….will not change anything,” said Rublev.
“To give all the prize money to humanitarian help, to the families who are suffering, to the kids who are suffering, I think that would do something, at least a bit.
“Tennis will, in that case, be the first and only sport who donates that amount of money and it will be Wimbledon so they will take all the glory.”

Elina Svitolina is the highest ranked Ukrainian female player on Tour. She believes players should be allowed to play but only if they condemn the invasion of her country. Something which could place Russian players at risk. Last month the country introduced laws making it an offence to promote information “discrediting the Russian Armed Forces” and spreading what they perceived as ‘fake news.’ According to Deutsche Welle 300 incidents have been investigated and prosecutions have been made against 21 people. The penalty includes the possibility of being imprisoned for up to 15 years.

“We don’t want them banned completely,” Svitolina told BBC Radio 5 Live Breakfast.
“If players don’t speak out against the Russian government then it is the right thing to ban them.”
“We just want them to speak up, if they are with us and the rest of the world or the Russian government. This is for me the main point. If they didn’t choose, they didn’t vote for this government, then it’s fair they should be allowed to play and compete.” She added.

With few optimistic that banning players from tennis events will have any impact on Russia’s invasion of Ukraine, it remains to be seen what comes next. There is no appetite from players to boycott Wimbledon like they did back in 1973 when Nikola Pilić wasn’t allowed to participate by his national federation for not playing in the Davis Cup.

It was in 1973 when the WTA was founded by Billie Jean King who joined the likes of Novak Djokovic and Martina Navratilova in condemning the 2022 ban. King has won a record 20 titles at Wimbledon – 10 in women’s doubles, six in singles and four in mixed doubles.

“One of the guiding principles of the founding of the WTA was that any girl in the world, if she was good enough, would have a place to compete. I stood by that in 1973 and I stand by that today,” King said in a statement.
“I cannot support the banning of individual athletes from any tournament, simply because of their nationality. Tennis is stronger when we stand together, and our continued support of the Tennis Plays for Peace initiative, which provides meaningful financial support and resources to Ukraine, needs to be our focus.”

There is also an argument for double standards. Players are banned but others such as umpires or coaches from those countries are still allowed to work at British tournaments. Providing they meet certain criteria.

At the moment it is unlikely that Wimbledon or the LTA intends to change their mind about banning Russian and Belarusian players. Admirably they are standing up for what they believe in but now they face possible consequences which could include fines and removal of tournament licenses.

Is it worth it? Only time will tell.