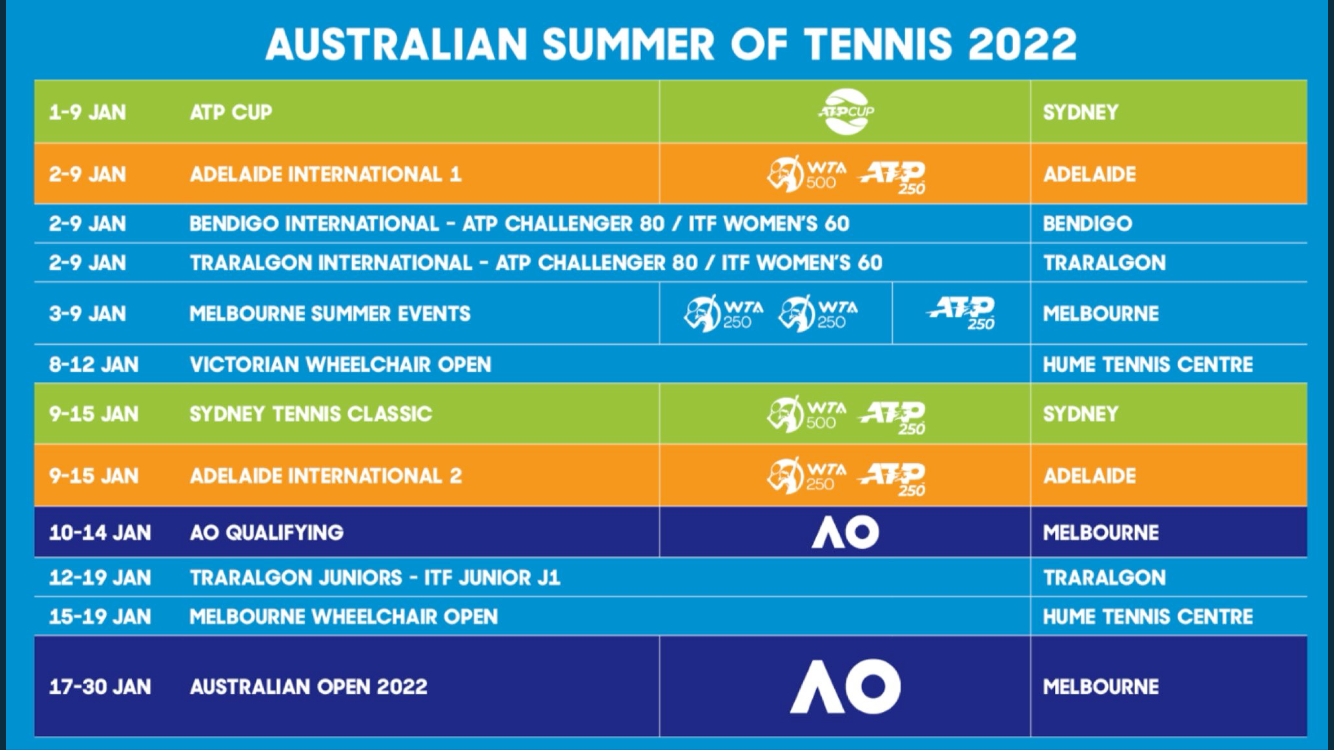 The schedule for this month’s tennis events in Australia (twitter.com/tennisaustralia)

With the 2022 Australian Open just two weeks away, the world’s best are down under and eager to obtain significant match play.  And Australia is happy to oblige, providing six tour-level tournaments this week.

The third-annual ATP Cup, a team event, started on Saturday in Sydney, featuring 10 of the ATP’s top 13 singles players.  The round robin stage has already seen some considerable upsets, with US Open champion Daniil Medvedev and Wimbledon finalist Matteo Berrettini both losing their opening matchups.

Main draw action will begin on Monday in Adelaide, which is hosting a WTA 500 and an ATP 250 event.  The WTA draw features five of the WTA’s top 10, headlined by World No.1 and Australia’s own Ash Barty, who has not played since the US Open.

Melbourne will stage two WTA 250’s and one ATP 250 event.  Rafael Nadal and Naomi Osaka will both make their returns this week after extended absences.  Main draw matches will begin on Tuesday.

Each day, this preview will highlight the most prominent matches from around Australia.

Group Standings are here, Order of Play is here.

Ruud defeated Dusan Lajovic in straight sets on Saturday, while Bautista Agut dominated Cristian Garin 6-0, 6-3.  The Spaniard took their only previous meeting, though that was four years ago when the Norwegian was ranked 194th in the world.  Casper has not lost a best-of-three match to a player ranked outside the top 15 since last April.  Roberto is currently ranked No.19.

Stefanos Tsitsipas vs. Diego Schwartzman – Not Before 7:00pm on Ken Rosewall Arena

Tsitsipas withdrew from his first singles match on Saturday due to lingering elbow issues, but was victorious in doubles that same day.  He’s currently penciled in to play Schwartzman on Monday, who on Saturday lost only three games to Nikoloz Basilashvili.  They have split two previous meetings, though they haven’t played in nearly four years.

Monday’s play begins with two Roland Garros semifinalists facing off.  Sakkari was consistently good in 2021, compiling a record of 38-20.  Zidansek struggled on hard courts following the French Open, going only 4-7.  This is their first career meeting.

Shuko Aoyama and Ena Shibahara (1) vs. Victoria Azarenka and Paula Badosa – Not Before 4:30pm on Court 2

Azarenka and Badosa created one of the best matches of 2021 in the Indian Wells final, when Paula prevailed in a third-set tiebreak.  They will have a rematch of that championship match in the first round this week, but first they’ll team up to face the top seeds in doubles, who won five titles last season.

The WTA draws are here and here, and the ATP draw is here.