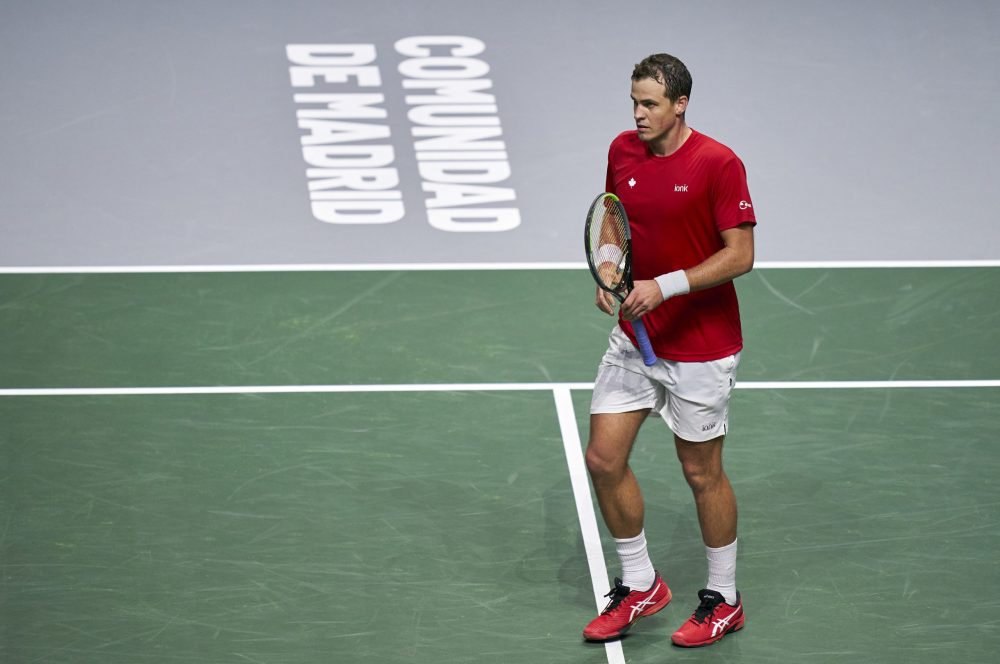 Kazakhstan is through to the quarterfinals at the Davis Cup Finals in Madrid after beating Canada who was looking to stay alive.

Kazakhstan has officially won group B and booked a spot in the final eight of the tournament after Mikhail Kukushkin and Alexander Bublik posted wins over Brayden Schnur and Vasek Pospisil.

Canada needed to go a perfect 3-0 to give them a small chance of obtaining a second place spot but losing both singles means their run is over and they have failed to advance after reaching the final back in 2019. Unlike two years ago, the team were missing their top players Denis Shapovalov and Felix-Auger Aliassime who withdrew from the event less than a month before it started.

“Going in, we went from being the favorites in this group to having a tough task ahead of us,” said captain Frank Dancevic.
“I thought they (team Canada) gave their hearts out there this week, and they did everything they could to try to get us through.’
“We knew we had to win 3-0 today to have a chance through the qualifying, and it was a really, really tough task. But in the end we’ll keep our heads up and regroup, assess a few things from this week and move forward from here.”

First up was Kukushkin facing the young Canadian Schnur who was playing his first singles match of the event. The Kazak needed two hours and 54 minutes to post a 6-3, 6-7, 7-5 win.

The Nur-Sultan resident hit 35 winners in the match while the Toronto native hit a massive 63 unforced errors in a match that he almost came back to win.

The first three games of the match went with serve and at 2-1, the world number 183 set up the first break point of the match with a powerful return winner and broke the Canadian with a stunning passing shot.

That break of serve sufficed for the Kazak to serve out the first set and take a 1-0 set lead.

Schnur faced immense pressure once again early in the second set but dug deep and saved three break points at 1-1 to avoid being broken early. The set stayed on serve until 5-5 when once again the world number 183 broke and had a chance to serve out the match.

The Canadian saved three match points by playing some outstanding defensive tennis trying to keep his country alive and forced a tiebreaker. The world number 234 ended winning that breaker and taking the set to force a third deciding set.

Schnur kept it going into the third and managed to break in the first game of the set but was broken right back the following game. It stayed on serve until 6-5 when the Kazak found himself with his fourth match point of the match and was able to finally seal the win.

In the second singles rubber, it was Canadian veteran Vasek Pospisil taking on the Alexander Bublik. Bublik managed to get the win in straight sets 6-2, 7-6 in 59 minutes, serving 14 aces and hitting 8 winners in the match.

The first set stayed on serve until 3-2 when it was the world 36 who earned the first break point of the match and broke to take a 4-2 lead.

With the momentum in his favour, Bublik turned that break into a double break and was able to serve out the first set in a mere 26 minutes. The second set stayed on serve until 6-6 and needed to be decided by a tiebreak.

In the breaker, it was tight until Pospisil had two set points at 6-4 but the Kazak saved both and went on to win the breaker 8-6 and the match.

In the third and last match of the tie, the Kazak pairing of Andrey Golubev and Aleksandr Nedovyesov beat the Canadian duo of Peter Polansky and Brayden Schnur 6-4, 6-7, 6-1 in two hours and six minutes.

The win in the doubles means Kazakhstan has swept Canada and will now await their quarterfinal opponent who they won’t play until Wednesday. In regards to Canada, they head home after suffering two losses.

Related Topics:Davis Cup 2021
Up Next