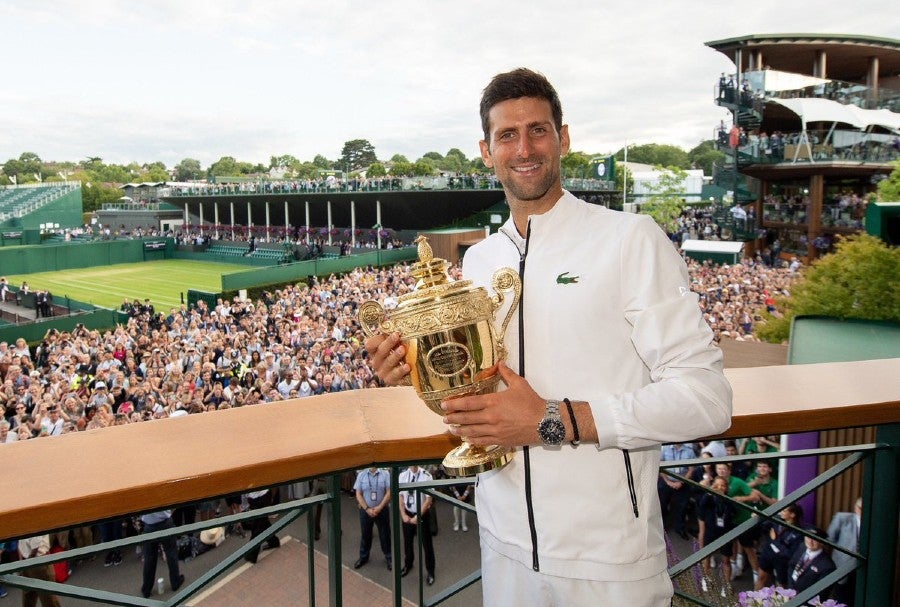 Novak Djokovic with the 2019 Wimbledon trophy (photo via Wimbledon Twitter)

In his hunt for all-time greatness Novak Djokovic returns to the grand Slam where he won back-to-back matches for the first time in his record-breaking career.

After coming through qualifying in 2005, Djokovic defeated Juan Monaco and Guillermo Garcia Lopez before falling to fifth seed Sebastian Grosjean. The run elevated the Serbian into the world’s top 100 for the first time in his career at the age of 18. Since then, Djokovic has established himself as one of the sports all-time greats and has held the world No.1 position more weeks than any other player on the ATP Tour. At Wimbledon specifically, he has already clinched the title five times and currently holds a 88% win rate (72 wins against 10 losses).

This year he will be hoping to continue what has been an undefeated run in the majors so far. Should he prevail at SW19 once again, he will rewrite the record books for multiple reasons.

Here are four records and milestones that are at stake for Djokovic.

Wimbledon provides Djokovic with the opportunity for him to achieve an accolade he has been chasing after in recent times. Should he prevail at The All England Club he will claim his 20th Grand Slam title and equal the men’s all-time record which is currently shared by Roger Federer and Rafael Nadal.

“Grand Slams are the biggest motivation I have right now at this stage of my career,” Djokovic told reporters on Saturday. “I want to try to make the most out of Grand Slams as I possibly can. I’m trying to peak at the majors. I’ve been managing to do that throughout my career. I’ve had the fortune to really play my best tennis when it mattered the most I think.”

Should he claim his 20th major trophy, Djokovic will move into fourth place for most won among men and women. Margaret Court currently leads the list with 24, followed by Serena Williams (23) and Stefi Graf (22).

On a 14-match winning streak at Wimbledon, Djokovic is bidding to win the tournament for the third consecutive time after 2018 and 2019. Last year’s edition was cancelled due to the COVID-19 pandemic. Should he do so, the Serbian would become only the fourth man in the Open Era to do so.

Pete Sampras was undefeated between 1997-2000, Bjorn Borg won five straight titles between 1976-2018 and Federer was dominant between 2003-2007. Overall, only 10 men have managed to defend their title at Wimbledon in the Open Era.

Following his successes at the Australian Open and French Open, Djokovic could become the first player in over 50 years to win the first three Grand Slams of the season. The last to do so was Rod Laver in 1969 who went on to win the Calendar Grand Slam for the second time in his career after 1962. The only other players to have ever achieved the milestone was Jack Crawford in 1933, Don Budge in 1938 and Lew Hoad in 1956.

It has been more than a decade since a male player won the French Open before going on to triumph at Wimbledon the same year. The last player to do so was Rafael Nadal back in 2010 who scored the double for a second time in his career after 2008. Laver, Borg and Federer are the only other men to have achieved the milestone in the Open Era.