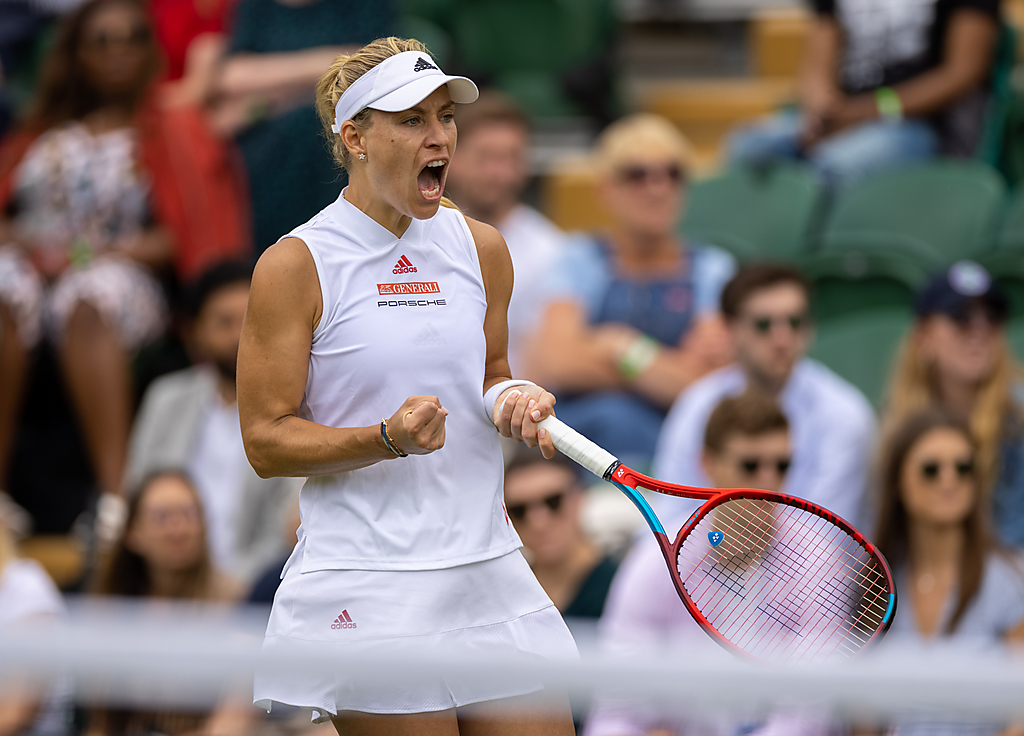 Angelique Kerber (GER) celebrates her win against Aliaksandra Sasnovich (BLR) in the third round of the Ladies' Singles on No.2 Court at The Championships 2021. Held at The All England Lawn Tennis Club, Wimbledon. Day 6 Saturday 03/07/2021. Credit: AELTC/Simon Bruty

Germany’s Angelique Kerber has experienced a turbulent 2021 season and she is still only half way through it.

The former world No.1 didn’t appear to be in the kind of form to challenge for a Grand Slam title a few weeks ago after starting the year by winning back-to-back matches in two out of 10 tournaments played. In the first round of the French Open she fell to a qualifier ranked 139th in the world. However, once she set foot on the grass a dramatic turnaround occurred.

It started in her home country where she won the Bad Homburg Open in what was her first title for almost three years. Carrying that momentum into Wimbledon, she defeated players such as Coco Gauff and Karolína Muchová to reach the semi-finals. Making it her best run in a major since she lifted the Wimbledon title back in 2018. Her journey came to an end on Thursday after a straight sets loss to world No.1 Ash Barty. Immediately after that loss, one eagle eye journalist noticed the German smiling as she walked towards the net to shake hands.

“I came back after such a long time, I was able to turn everything around, I won the tournament at home in Germany, I played unbelievable tennis, I put so many emotions and my heart on the court,” Kerber replied when asked about her emotions.
“If you go out and you have a standing ovation at the Centre Court in Wimbledon, I mean, that’s the best feeling you can have even if you lose.’
“I tried everything. I put everything on court today.”

Whilst the 33-year-old may not be the most decorated player on the Tour. Her results on the grass speaks for itself. Impressively, only Serena Williams and Venus Williams have won more matches than her on the surface among active players. At Wimbledon alone, she has won 36 matches out of 48 played.

Now playing as one of the oldest on the Tour, Kerber is reluctant to compare her current level of tennis to that of the past. For her, there is another reason why she continues to play.

“For me, it’s more that I still have the passion for the sport, that I played well, that I played great matches against the best players in the world,” she said.
“I know that I also improved my game in a few things. But still I have my game style. I think it’s similar to 2018.”

It remains to be seen how Kerber’s resurgence will fair when she switches to the hardcourts. Unsure about her Olympic participation, she will be consulting with her team over the coming days concerning her schedule. She is coached by Torben Beltz who has also previously worked with Donna Vekic.

“I think it’s important that I really take the confidence with me from the last three weeks,” she states. “I know that I’m on the right way. I know how it is to work hard and now to continue my play.’
“I think this will be the challenge to stay on this level and playing good matches again on hard court.”

Kerber will move up to 22nd in the WTA rankings next Monday.