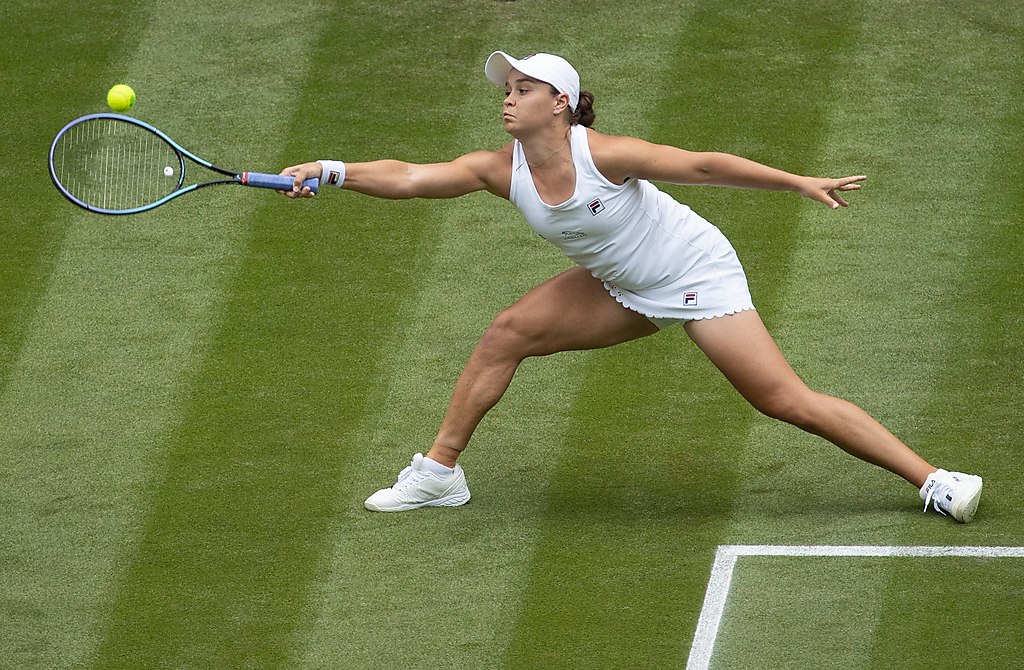 Ashleigh Barty (AUS) reaches for the ball in her match against Anna Blinkova (RUS) in the second round of the Ladies' Singles on Centre Court at The Championships 2021. Credit: AELTC/David Gray

When Elina Svitolina, Sofia Kenin and Victoria Azarenka followed Serena Williams, Belinda Bencic and Petra Kvitova out of the exit door at Wimbledon before the third round began, all the usual stories about the seeded players crashing out of the women’s draw early started popping up all over the news feeds of major publications.

However, anyone who looked at these articles and feared for the quality of the Ladies’ Singles event at Wimbledon 2021 need not have worried, as Tuesday’s quarter-finals demonstrated.

The German will have to prepare for a really difficult task. She faces World No.1 Barty, who has finally broken her quarter-final duck at SW19 and now looks well set to win her first Wimbledon title.

The Australian was in commanding form in the last eight. She took the first set 6-1 against compatriot Alja Tomljanovic in just 25 minutes. Then she brushed aside a minor fightback from her opponent to win the second set 6-3.

Despite her excellent form, Barty will be very wary of Kerber. The German is the only former champion still in the draw. And she has caused the World No.1 plenty of problems in their previous meetings, as their 2-2 head-to-head record suggests.

Furthermore, the 25th seed is one of the best in the world on grass when she is on form. And she is currently enjoying a ten-match winning streak so her confidence is high. Whatever happens, it promises to be a thrilling encounter and the winner must surely be considered the favourite to win Saturday’s final.

Ever since she emerged, Aryna Sabalenka has been tipped as a future Grand Slam champion. She is almost certainly the most powerful player in the women’s game. When she is at her best, she uses her big serve and even bigger groundstrokes to completely overwhelm opponents.

However, despite her obvious abilities, the Belarussian had never reached a major quarter-final before this week. Up until now, she has always been one error-strewn display away from an early exit. Therefore, if this breakthrough fortnight turns out to be a yardstick of her growing maturity, the rest of the WTA Tour should definitely be worried.

Sabalenka has not breezed through the draw by any means. Britain’s Katie Boulter pushed her hard in round two. Then rising star Elena Rybakina tested her in round four. However, the 2nd seed produced a very impressive performance in the last eight to defeat Ons Jabeur, the rapidly-improving Tunisian who can be a dangerous opponent for anyone.

In the semi-final, the Belarussian will face Karolina Pliskova. The Czech is a fascinating figure on the WTA Tour. She seems to have almost all the attributes needed to win a Grand Slam title. She possesses a brilliant serve, precise, powerful groundstrokes and a fearless approach to the toughest matches.

Despite these qualities, the 8th seed has only reached one Grand Slam final and two semi-finals. This has led many observers to question her movement, which is relatively limited, and her temperament on court, which does occasionally boil over, as her furious swipe which took a chunk out of the umpire’s chair in Rome demonstrated.

Encouragingly for Pliskova’s followers, the Czech has looked to be the epitome of calm at Wimbledon 2021 so far. She has glided through the draw like a swan across a lake. And it has been mightily impressive to watch her make it through to the semi-final without dropping a set.

The 8th seed’s serene progress and greater experience make her the more likely winner of her last-four showdown with Sabalenka. She should also be encouraged by her superb wins over Serena Williams (the player most similar to the Belarussian) in 2016 and 2019. During both those victories, she demonstrated her ability to skilfully re-direct powerful strikes into open areas of the court.