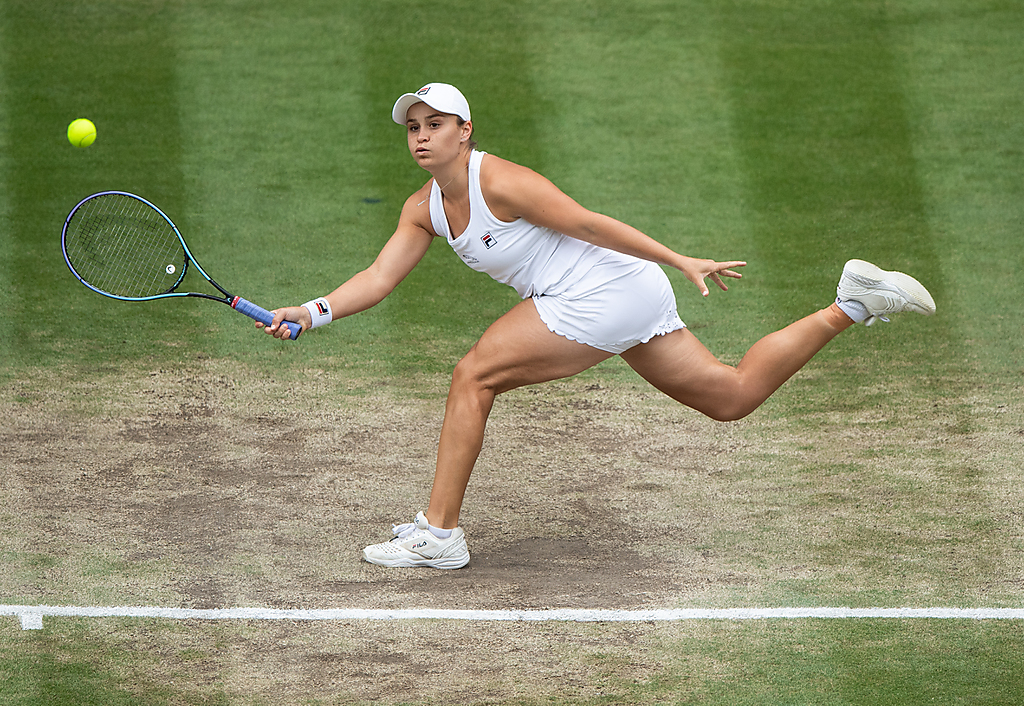 Ashleigh Barty (AUS) playing against Karolina Pliskova (CZE) in the final of the Ladies' Singles on Centre Court at The Championships 2021. Held at The All England Lawn Tennis Club, Wimbledon. Day 12 Saturday 10/07/2021. Credit: AELTC/Jonathan Nackstrand

Ash Barty has become the first Australian woman to win the Wimbledon Championships in over 40 years after brushing aside an at times erratic Karolina Pliskova in the final.

Barty, who won the Wimbledon girls’ title 10 years ago, rallied to a 6-3, 6-7(4), 6-3, roller-coaster win on Centre Court after almost two hours of play. The highly anticipated encounter was hindered by emotions throughout with Pliskova struggling to produce her best tennis as she leaked 31 unforced error errors. Barty herself also experienced her share of blips but they were not as substantial as she hit seven aces and 30 winners en route to the milestone victory.

“Karolina is an incredible competitor and she brought out the best in me today,” Barty said during her on-court interview. “It was an exceptional match right from the start and I knew I had to bring my very best level.’
“I was really proud of myself with how I was able to reset (after the second set) and just keep going.”

In what was the first women’s final featuring two debutants since 1977, Barty got off to a blistering start. A 14-point winning streak saw the Australian surge to a 3-0 lead in just 10 minutes as her opponent visibly struggled to contain her nerves. Setting a new Wimbledon record for most consecutive points ever won in a women’s final. Barty then worked her way to a double break at the expense of a Pliskova double fault on break point. A somewhat unexpected event considering Pliskova has dropped serve just four times across her six previous matches.

However, the world no.13 wasn’t the only player to falter during the opening set with Barty also struggling with her own issues. Closing in on taking a decisive lead, out of nowhere the top seed was unable to hold after getting broken twice in a row with one of those occurring when she was serving to take the set 6-1. Contending with an elevation in Pliskova’s level, Barty still had enough of a margin to close out the opener as she converted her first set points with the help of a forehand error from her opponent.

The roller-coaster continued into the second frame with both players exchanging blows. First it was Barty who broke to love and moved up to a set and 3-1 lead. However, two games later she experienced a taste of her own medicine by getting broken herself to love. Towards the business end Barty worked her way to 6-5 and had the chance to serve the match out but failed to seize the opportunity.

Pliskova’s resistance finally rewarded her in the tiebreak as she valiantly battled her way to a 6-2 lead. After failing to convert two set points, it was third time lucky after a double fault from the world No.1 sent the match into a decider.

With all to play for it would be a single break in Barty’s favour that would get her over the finish line. Another error-stricken Pliskova service game granted her a 2-0 lead at the start of the final set. Serving for the title, an ace down the line handed Barty her first championship point which she converted after a shot from across the court slammed into the net.

“It took me a long time to verbalise saying that I want to win this tournament and being able to live out my dream right now with everyone here has made it better than I could ever imagine,” said the new champion.
“I didn’t sleep a lot last night and was thinking about all the what ifs? But when I was coming out on this court I felt at home in a way.”
“I have to thank every single person in this stadium, you have made my dream so special.” She added.

Throughout the tournament Barty has paid tribute to her idol and mentor Evonne Goolagong who won the title back in 1961. Her outfit for the tournament was inspired by what she wore at the event 50 years ago. Barty has previously said the ‘iconic dress’ has inspired both her and a generation of indigenous youth.

“I hope I made Yvonne proud,” Barty stated before starting to cry.

There is some silver lining for Pliskova who played in her first major final since 2016. She will move up the rankings to No.7 when they are updated on Monday. Her highest position since May.

“I enjoyed every minute playing on this court,” the Czech said.
“I think she was playing an incredible tournament and it was an incredible match today. It wasn’t easy closing out the second set and I was fighting really hard but she played very well.”

Barty is the 11th active player to have won multiple Grand Slam titles after also previously triumphing at the 2019 French Open. At Wimbledon she is the fourth woman in the Open Era to have won both the junior and senior titles after Ann Jones, Martina Hingis and Amélie Mauresmo.