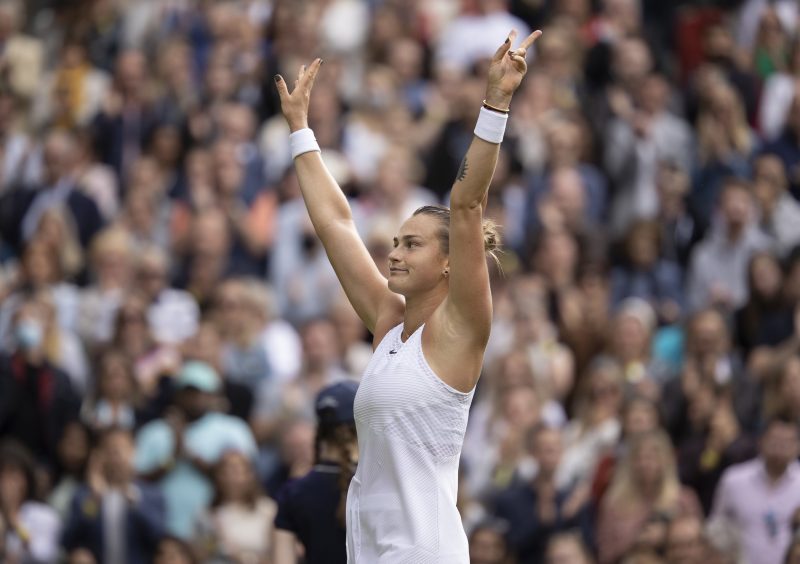 The first real title contenders usually emerge around day five of Wimbledon. This is because it is the earliest moment when it is possible for players to seal a coveted second week spot.

Contender number one is Aryna Sabalenka. The big-hitting Belarussian survived a tricky encounter with Great Britain’s Katie Boulter in round two, but she had a much more comfortable time in round three as she dispatched qualifier Maria Camila Osorio Serrano 6-0 6-3.

The Colombian teenager performed superbly in the opening two rounds to reach her first-ever Grand Slam third round. However, she struggled with a thigh injury throughout her match with Sabalenka and she was never able to offer a serious challenge to the number two seed.

Next up for the Belarussian will be Elena Rybakina. The Kazakstani booked her place in the last 16 with an impressive 6-1 6-4 win over Shelby Rogers, the American who knocked out French Open semi-finalist Maria Sakkari in round two.

Rybakina could prove to be a very difficult opponent for Sabalenka. Therefore the match will provide a true test of her title credentials.

The second contender is Iga Swiatek. The 2020 French Open champion has proved to be a quick learner on grass. She is yet to drop a set at Wimbledon this year. And even though today was just her 11th professional match on the surface, she destroyed Irina-Camelia Begu 6-1 6-0 in just 55 minutes.

The Pole’s reward is a devilishly tricky-looking meeting with Ons Jabeur. The Tunisian possesses a huge repertoire of shots, which makes her a very difficult opponent for anyone when she performs well.

To make matters worse for Swiatek, Jabeur just produced one of the best displays of her entire career to knock out 2017 champion and Garbine Muguruza.

The 11th seed was not at her best, but she did not play badly by any means. Her Tunisian opponent was just brilliant on the day, as her 44 winners to 27 unforced errors ratio suggests.

She had to work hard for her victory though – particularly on the Spaniard’s serve. Muguruza saved a remarkable 24 break points during the match.

Title contender number three is Karolina Pliskova. The Czech has always had sufficient talent to win a Grand Slam, but she has never produced her best when she has needed it most.

The 8th seed has had a particularly torrid time at Wimbledon. She has never made it past the fourth round. However, she will have another chance to break her quarter-final duck after she notched up a relatively straightforward 6-3 6-3 triumph over compatriot Tereza Martincova in round three.

Ludmilla Samsonova stands in her way in the last 16. The Russian was ranked outside the top 100 less than a month ago, but she has enjoyed a meteoric rise courtesy of her first WTA title in Berlin and her progress so far at SW19.

During her current 10-match winning streak, Samsonova has beaten Marketa Vondrousova, Madison Keys, Victoria Azarenka, Belinda Bencic and Jessica Pegula. Today, she added Sloane Stephens to that list after battling to beat the American 6-2 2-6 6-4. She could prove to be a very dangerous opponent for Pliskova.

The fourth contender to emerge from the bottom half of the draw is Madison Keys. The American loves the grass and has won two of her five WTA titles on the surface. However, this has somehow never translated to success at Wimbledon, where she has never gone further than the last eight.

Things look promising for the 23rd seed this time around though. She has won all three of her matches so far in straight sets and has rarely looked troubled. And the American was understandably pleased with her 7-5 6-3 victory over 13th seed Elise Mertens today.

“I am absolutely beyond happy,” Keys said in her on-court interview. “I think I just played a really great match. Also, I think this is the first time I’ve ever won on this court, so that’s a bonus.”

Viktorija Golubic awaits the American in round four. The Swiss is currently enjoying arguably the best year of her career so far, and she dismissed Madison Brengle 6-2 6-1 in impressive style to reach the last 16. Despite this, it is hard to imagine her beating Keys unless the 23rd seed has a bad day.