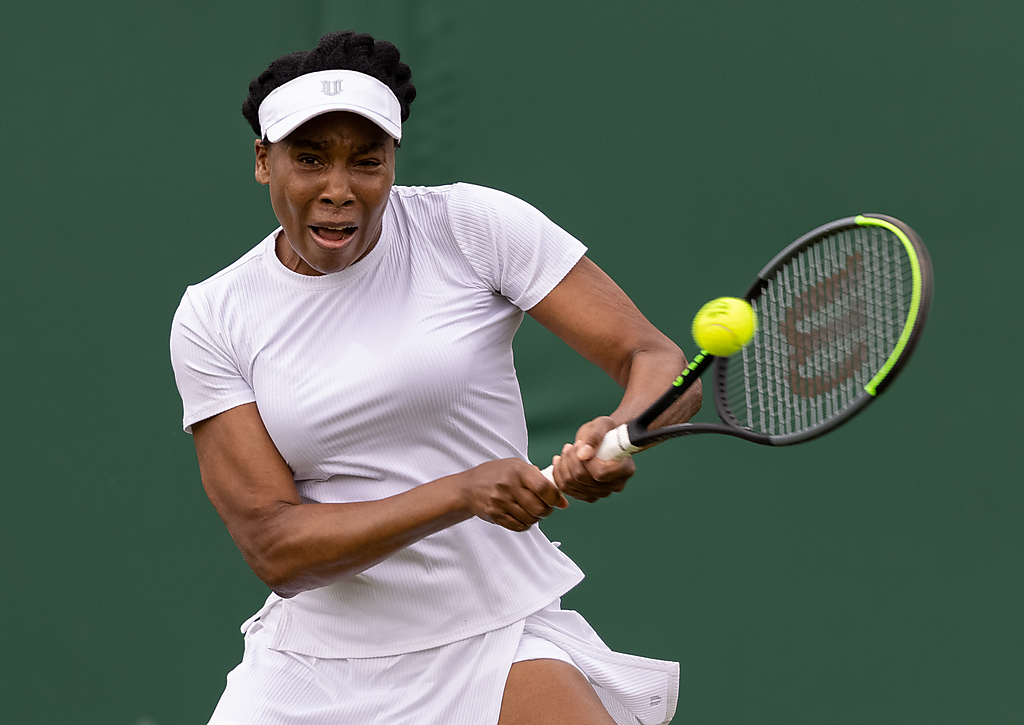 Venus Williams (USA) playing against Mihaela Buzarnescu (ROU) in the first round of the Ladies' Singles on No.3 Court at The Championships 2021. Held at The All England Lawn Tennis Club, Wimbledon. Day 2 Tuesday 29/06/2021. Credit: AELTC/Simon Bruty

Venus Williams has hinted that she hopes to return to Wimbledon next year at the age of 42 after crashing out of the tournament.

The five-time Grand Slam champion, who received a wildcard into this year’s draw, fell in straight sets to Tunisia’s Ons Jabeur. After a tightly contested first set between both players, Williams rapidly faded in the second as she went out 7-5, 6-0. The lacklustre performance saw the American hit twice more unforced errors than winners (36-15) as she won just 37% of her second service points. She has won only two matches in eight tournaments played so far this year.

“I think she played well. Just played super good, so I can’t take any credit away from her,” Williams said of Jabeur during her press conference.

At the age of 41, questions are mounting about how much longer Williams will continue playing. On the WTA Tour she is the oldest player to have an official ranking and the only to be over the age of 40. She made her Wimbledon debut back in 1997 which was before the birth of Grand Slam champions Iga Swiatek, Naomi Osaka and Bianca Andreescu.

Renowned for keeping a tight lid on her future retirement plans, Williams says she would like to return back to The All England Club in 12 months time if she had the opportunity to do so. She is currently ranked 111th in the world.

“Of course. Who wouldn’t want to be at Wimbledon? Lots of people want to be here,” she replied.

Pressed further about her plans, Williams was directly asked if this year was her last as a professional player.

“Yeah, when it’s my last, I’ll let you all know. I’ll give you a little whisper in your ear,” she stated with a smile.

A day before she took to the court to play Jabeur, Williams’ sister Serena was forced to retire from the tournament in tears due to injury after slipping on Centre Court. Making it the first time in her record-breaking career she hasn’t won at least one match in a Wimbledon draw.

“I absolutely couldn’t watch. It was too much. I just couldn’t watch it. I know exactly what that feels like when all your faculties are taken away, things you work hard for and earn, and suddenly life happens,” Williams commented on her sister’s misfortunes.

After her retirement, Serena opted not to speak with the media and instead issued a brief statement. No further details since then have been given and Williams was reluctant to go into any detail.

“I think she’s doing the best you can when you get hurt. It’s awful. It sucks. I can’t speak for her,” she concluded.