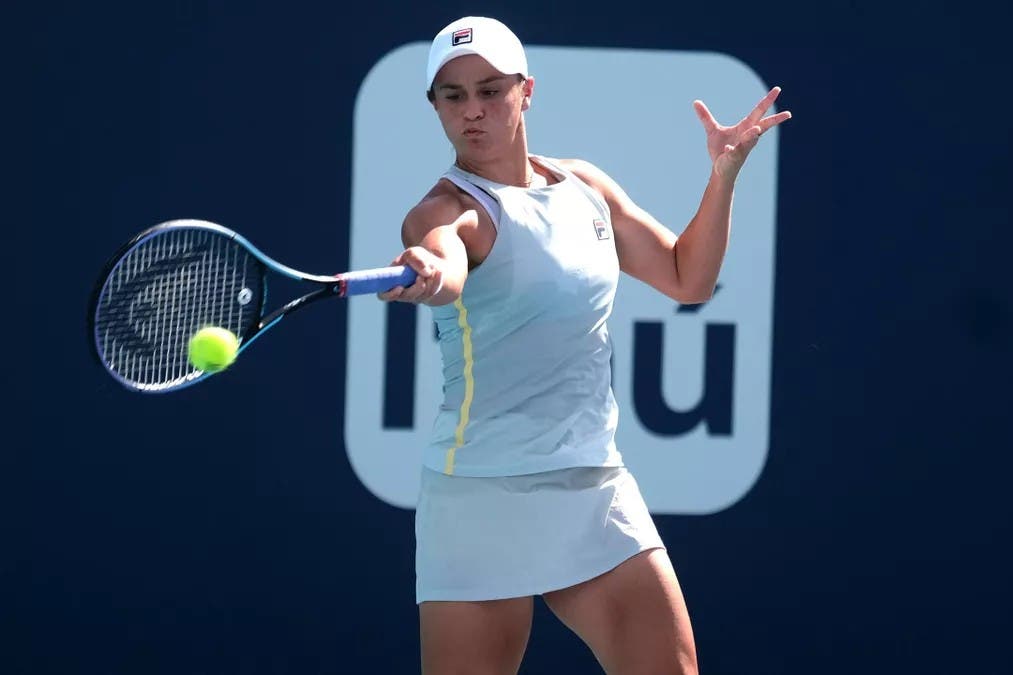 Ashleigh Barty is into the final of Miami Open after a relatively comfortable 6-3, 6-3, win over her opponent Elina Svitolina in less than 90 minutes.

The worlds No.1 hit 28 winners in the process while her rival leaked 34 unforced errors in their clash. Barty’s latest victory improves her win-loss record of 12-2 this season and she has now won 11 match in Miami. She will have a shot on Saturday of becoming the fist woman since Serena Williams to win back-to-back Miami titles after triumphing in 2019. Last year’s edition was scrapped due to the COVID-19 pandemic.

“It wasn’t easy by any means I thought I played a good match,” she said in her on-court interview after the win, ” I tried to be aggressive and I was able to execute, it’s a bit of a fine line sometimes but certainly happy with how today went”

From the word play the Aussie was on her game and earned a breakpoint in the opening game of the match with a sensational forehand winner and broke to take the early 1-0 lead.

Fifth seed Svitolina responded the very next game by trying to break back to go back on serve but she was thwarted by the world number one thanks in large part to her huge serve.

Barty had a chance to go up a double break after holding serve but the Ukrainian was up to the task once again at saving it. At 3-1 the world number one had another chance to do it and this time she would not fail as she would break once more to take a commanding 4-1 lead.

The double break didn’t last long as the number five seed earned two breakpoints the very next game and would break to regain one of the breaks back.

Svitolina was made to work hard once again saving another breakpoint on her next service game and the very next game tried to break once again to go back on serve but the Aussie serve was in full force and she would hold serve.

At 5-3 Barty would earn two set points on her opponents serve and would break again to seal the first set. Before the second set could begin she called for the trainer and took a medical timeout off court for a abdominal issue.

The Ukrainian was in no mood to play games and went on the offensive in the first game of the second set earning a breakpoint but the Aussie would once again save it with her big serve.

After holding serve it was the world number one who went on the attack looking for the crucial break and had three chances to do it but it Svitolina who would come up big saving all three and holding serve.

At 2-1 the Aussie would finally make the breakthrough to take a 3-1 lead but again the break wouldn’t last for long as the number five seed broke right back the very next game.

Once again the very next game the world number one stay determined and would break to take a 4-2 lead and cruised from there to serve out the match.

After the match in her post game press conference she spoke about what it felt like to be back in the final as a repeat finalist.

“It’s really exciting and obviously that’s the goal for every tournament you play in, you want to give yourself a chance to hold the title at the end, it’s an exciting opportunity now that we’re in another final in Miami,” Barty commented.

In that final she will either play Bianca Andreescu who has mentioned this week she is seeing shades of the way she played back in 2019.

“Bianca (Andreescu) I haven’t played her before, haven’t hit with her before so it’s a fresh one for both of us but she’s proven time and time again she loves the big matches, the big tournaments and has the physicality to win them,” she said.

That match is scheduled for last on Grandstand at 8:30 pm local time to decide who will play Barty in the final on Saturday.