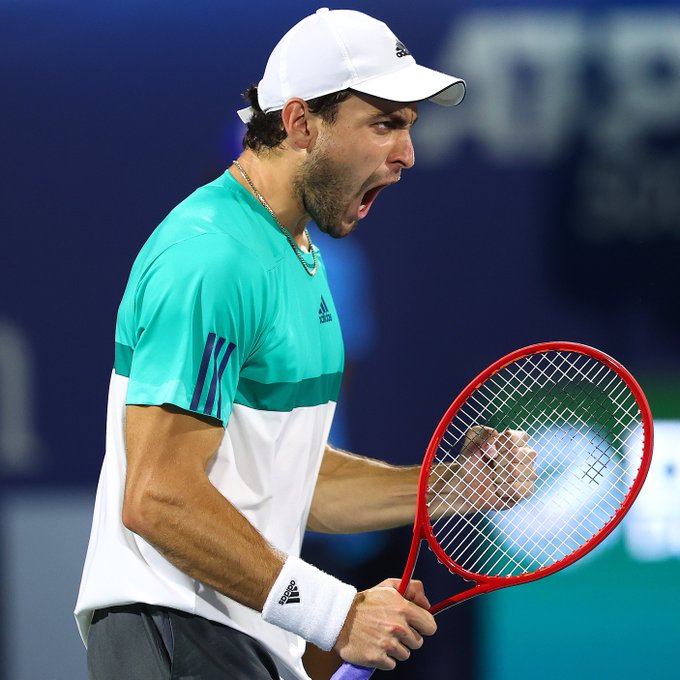 The Russian won his first ever ATP title ending the South African amazing run to the finals.

Aslan Karatsev won his maiden ATP title on Saturday beating the South African Lloyd Harris in straight sets 6-3, 6-2 in a match that barely lasted 90 minutes. He dominated the match from start to finish with 8 aces and 27 winners.

“I’m super happy it was a tight match, really nervous and I want to congratulate my opponent for the final, he did a great week, every final is a different match from the beginning of the week, during the week so I’m happy that I won one”.

The Russian got off to a fast start winning his opening service game and putting pressure right away on the world number 81 serve and would get the early break with his powerful forehand.

The South African had a chance to break back to go back on serve but the world number 42 would save it right away with one of his booming serves. At 4-1 he had a chance to go up a double break but the native of Cape Town would save all three playing some great survival tennis.

Karatsev would serve out the first set with a love hold to take it 6-3 and was one set away from his title.

He was even more dominant in the second set earning breakpoints in the very first game of the set with Harris serving, he would break to once again take an early 1-0 lead.

After consolidating the break the Russian had two more breakpoints to go up a double break but the South African did a good job saving both. At 3-2 the world number 81 had a chance to break to go back on serve but the Russian was up to the task of saving it.

At 4-2 Karatsev earned another breakpoint with a solid return winner and would break the following point to take a 5-2 lead and served out the match to seal the victory.

After the match in his post match press conference Harris touched on the positives he can take from a great week he had in Dubai.

“Absolutely like you said there are so many positives from this week, coming through seven matches, Aslan today was just too good but sometimes it happens like that, you just have to take the big up from the week move forward, and take it into the next tournaments”.

Karatsev in his post-match press conference answered a question from Ubitennis if there had been a major overhaul in his game that led to his early success this season so far.

“We try to play more offensive, more aggressive, to stay close to the line I mean this part we work on a lot and I think the target was the mental part that you have to believe what you are doing, believe more in yourself and that’s how the confidence grow up for me, once you start to believe then you start to feel your game and of course it was a lot work outside the court, inside the court”

Karatsev will now head to Miami to play the Miami Open which begins next week on Tuesday at the Hard Rock Stadium complex.

Margarita Gasparyan and Daria Kasatkina book their spot in all Russian final in St. Petersburg