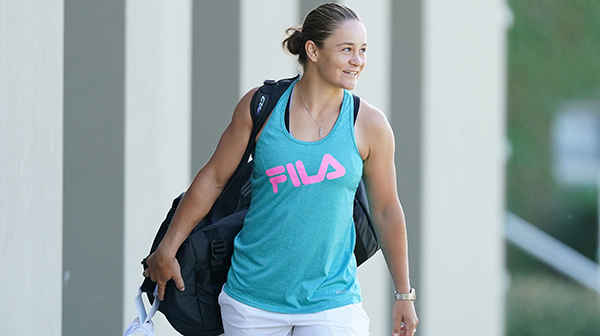 Some of the WTA’s top stars were among today’s winners in Melbourne as the preparations for the Australian Open intensify.

The world’s top WTA players were in action today as they looked to book their place in the last 16 of either the Gippsland Trophy or the Yarra Valley Classic.

World number one Ash Barty was among those in action as she competed on the WTA Tour for the first time since last February. Due to the restrictions in Australia, Barty was unable to travel to the tour’s international events since the Pandemic. However that unaffected her today as she cruised past Romanian Ana Bogdan 6-3 6-3.

After the match, the world number one talked about winning more grand slams in 2021, “I’d be extremely fortunate to be in the position to be in another slam final,” Barty told Reem Abulleil.

“That’s what we work for, why we do all the work through the preseason, eat all our green beans, do all the right things to try and get to that point where we have an opportunity to win big titles.”

Ash Barty’s preparations for an Australian Open title bid will continue on Wednesday against 16th seed Marie Bouzkova at the Yarra Valley Classic.

After her match Osaka acknowledged that she needs to start doing better at smaller tournaments, “I go into each tournament just trying to do the best that I can,” Osaka said in her press conference.

“I know that I have a really weird career in the way that I don’t really do that great at small tournaments, so I’m hoping to like fix that. I want to do well at every tournament that I play.”

Iga Swiatek will have to deal with new expectations in 2021 after winning her first grand slam at Roland Garros last year.

After the match Swiatek admitted it took time to get used to a different kind of pressure, “I wouldn’t say I was nervous but I just felt stressed in a different way,” the pole told WTA Insider.

“I felt it in my body because I felt really slow and heavy at the beginning. I didn’t know I was stressed before the match, but it wasn’t the first match that I felt that way. I’m looking forward to my next round and I’m kind of more peaceful. I hope it’s going to stay that way tomorrow.”

Swiatek will play 9th seed Ekaterina Alexandrova in her third round clash.