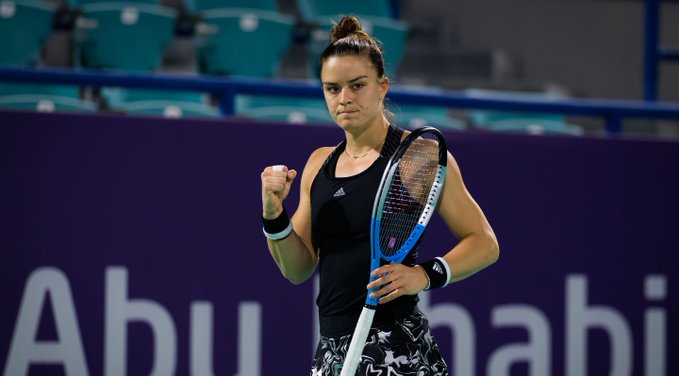 Maria Sakkari staged an emphatic comeback against Sofia Kenin to secure a place in the semi-finals of the Abu Dhabi Women’s Open on Monday.

The ninth seed struggled early on against the Australian Open champion after dropping the opening set before saving a trio of break points at the start of the second. However, a clinical fightback from the Greek saw her win 10 consecutive games to stun Kenin 2-6, 6-2, 6-0, in what was a roller coaster match. It is only the fifth time in her career that Sakkari has defeated a top five player on the Tour.

“I think I was rushing a little bit too much in the beginning,” Sakkari said afterwards. “Once I saw that what I was doing was not working I tried a different way. I’m glad I found a way to turn the match around.”

Overwhelming Kenin with 23 winners compared to her tally of eight, Sakkari also converted six out of 13 break point opportunities and won 63% of her service points. In the final set alone, she dropped only two points behind her serve. The victory is a case of sweet revenge for the world No.22 who lost to Kenin in both of their previous meetings during 2018.

It is the second time in the tournament Sakkari has defeated a Grand Slam winner after also getting the better of Gabine Muguruza in the third round. She has also scored wins over rising star Coco Gauff and Russia’s Anastasia Potapova.

The reward for the 25-year-old is a last four clash with Aryna Sabalenka, who has won her two previous tournaments and is on a 13-match winning streak. Sabalenka endured a much tougher quarter-final encounter after battling to a 6-4, 4-6, 6-3, win over Elena Rybakina. The two-hour battle saw the fourth seed hit 30 winners to 37 unforced errors as she broke the Rybakina once in each set.

“In the beginning of the second set I think I dropped my level a bit,” Sabalenka reflected. “But I think after 1-4 it was really good that I kept trying to come back and kept trying to find my game again, because it really helped me the rest of the match. It definitely helped me to win the third set.”

Heading into the clash, Sakkari will be the likely underdog. Not only is she ranked 12 places lower than Sabalenka in the rankings, her only win over the Belarusian occurred when they first met at the 2019 Cincinnati Open. Since then Sabalenka has beaten her three times in a row on a hard court.

“We know each other really well. We practice a lot together,” Sakkari said. “She’s one of the toughest players to play out there—I’ve beaten her once, so I think I can do it again, but it’s going to be tough.
“She’s very powerful, and she’s super confident right now.”

Sakkari is chasing after her second WTA title this week in Abu Dhabi. Meanwhile, Sabalenka is targeting her ninth.