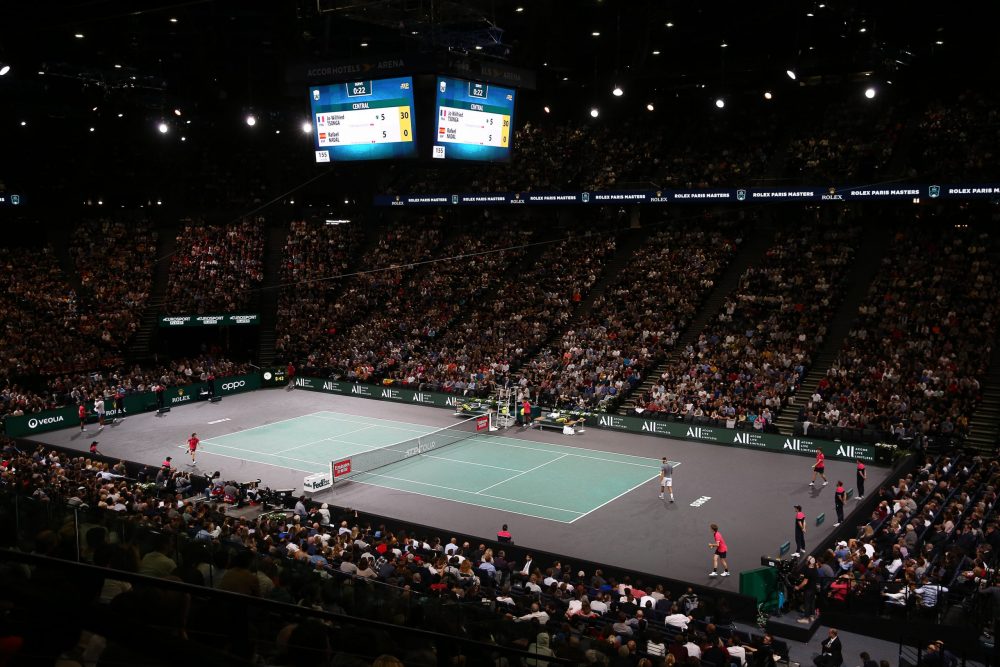 Venue of the Paris Masters (image via https://twitter.com/RolexPMasters)

Normally, the ATP tournament season ends with the Rolex Paris Masters. It is contested in the AccorHotels Arena in Bercy, which is in the city’s 12th arrondissement. The facility sits on the edge of Parc de Bercy whose tranquility is made even more appealing because of all the benches that offer a front row seat as life passes before your very eyes. The area is wonderfully Paris “funky” and nothing is more appealing before attending the matches than taking time to watch the skateboarders use the sloping sides of the arena to showcase their amazing collection of acrobatic moves on their boards. Nearby streets have a tantalizing array of cafes, shops and restaurants that are inviting and interesting to boot. The neighborhood doesn’t send out “Visit Me” vibes like locations such as the Musée d’Orsay or the Louvre, but it has its own distinct appeal that says, “this is Paris and we live here…”

We, (my wife Cheryl Jones is also a tennis journalist), have always loved traveling to Paris in November for the tournament. There is a charm that is particular to the autumn. There is a bit of bite in the air, which is often accompanied by fits of rain – and maybe even a flurry of tiny snowflakes that seldom last beyond their collision with the ground. Over all the setting has a much different “feel” than Paris during Roland Garros in the spring. The days are less frenetic. It is an opportunity to really savor experiences without the hustle and bustle of tourists on photographic safaris.

Of course, these are remembrances from “normal” times and 2020 has not even come close, on any level, to being normal. I wonder though if looking back is a good way to prepare for the future. For us, there was more to the forty-ninth staging of the event than listing the names of the winners.

That doesn’t mean Russian Daniil Medvedev’s 5-7, 6-4, 6-1 victory over Germany’s Alexander Zverev, in the final, should not be praised. The same applies to unseeded Felix Auger-Aliassime and Hubert Hurkacz, the Canadian/Polish tandem’s, surprising Matic Pavic of Croatia and Bruno Soares of Brazil, 6-7, 7-6, 10-2 for doubles honors.

The singles finalists and the winning doubles team have a lot in common.

Medvedev is twenty-four and stands six-foot, seven-inches tall – which is just a shade over two meters. Zverev is a year younger and an inch shorter. At twenty, Auger-Aliassime is the youngest of the group and being a mere (this is a joke) six-foot-four is the shortest of the quartet because Hurkacz is six-foot, five inches tall and is twenty-three years old.

This year, COVID-19 ravaged society and sports. It called attention to a “new normal” in which social distancing and mask wearing have become practices that everyone should have adopted by now. For us, the pandemic, along with the 2020 tournament results, created a special awareness. We have treasured our Bercy adventures of yesteryear and now we appreciate those memories even more.

Looking ahead, we realize that in life and in tennis there are new rules to play by. Travel, tournaments and tennis journalism have been altered permanently. Being flexible and adapting are essential “musts” every day, for everyone… But isn’t this exactly what the game is all about? Analyzing what is taking place, deciding on the necessary adjustments to make then looking forward to enjoying what will take place. In short, making the best of what is and not getting caught up in what could have been.

There wasn’t a full stadium roar from the crowd when Medvedev won. There wasn’t a cadre of journalists and photographers eliciting comments from and recording Auger-Aliassime and Herkacz’s astounding victory as an unseeded team. Still, the jubilation they all felt was very real. The history books won’t have an asterisk by their names; their victories will be noted across from the designation 2020.

Looking ahead, no one knows what to expect as the virus continues to pillage individuals and countries. But one thing is certain – Time will have all the answers. It always does.