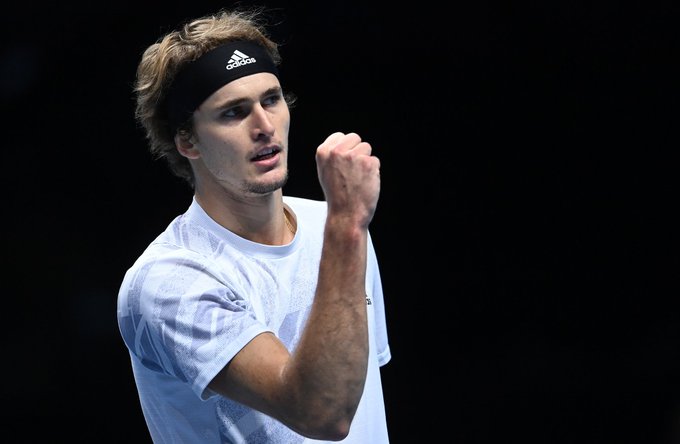 Another erratic match from the big German saw him win the hard way against a tough Diego Schwartzman.

In just over two hours, Zverev produced the better tennis when it mattered as he wins his second match at the ATP Finals for the first time in his career.

These days a Sascha Zverev match has ups and downs, lots of flows of confidence and quite a few double faults. This match was no different as Schwartzman tested the German’s nerves early on.

After a tough service hold, Schwartzman gained the first break of the match. The first key double fault from Zverev set up the break point for the Argentinian which was executed after taking advantage of the German’s poor net play.

However good resilience was shown by Zverev as he made sure Schwartzman’s nervy second serves were punished. A powerful forehand winner saw the scoreboard level.

Good mixture of slice and depth ensured Schwartzman was still in this match while the German was not aggressive enough as he failed to use enough angles and didn’t shorten the points up enough.

Backhand unforced errors from the 8th seed gave Zverev the important break and a 4-2 lead. Dictating points in this set was crucial for the German in terms of confidence and he slowly managed to achieve this.

A timid start to the ninth game saw Schwartzman create two break-back points. However Zverev’s stubbornness proved to be his strength as he upped the intensity and pace to seal the opening set 6-3 in 40 minutes.

Both players’ character was tested at the beginning of the second set as they both saved break points to hold their opening service games.

After a long opening games, Zverev showed good fluid tennis as he brought the powerful consistency to his game as he broke for a 2-1 lead.

At 3-1 it began to look like the German was going to cruise to victory however once again a lack of confidence and concentration rose in his game.

Unforced errors haunted the German as he was broken twice through some very erratic mistakes and handed the second set to the Argentinian 6-4. Despite some good serving, Zverev’s groundstrokes were beginning to haunt him against a player who he should comfortably be overpowering.

The Argentinian in the third set continued to take the match to Zverev using his variety and quick movement.

Although using the slice continued to be a good shot against the German, sometimes he used it on one too many occasions and in the fifth game Zverev exposed it with powerful winners for the break.

Even though Schwartzman continued to dig deep and cover the court with his pace and supreme angles, Zverev eventually overpowered his Argentinian opponent to win 6-3 4-6 6-3 in 2 hours and 13 minutes.

The 2018 champion now goes 1-1 in the group and knows a win against Novak Djokovic on Friday could see him into the semi-finals.

As for Diego Schwartzman, he will need to beat Daniil Medvedev next to have a slim chance of qualification.

The 21-year-old explains what it is like to face somebody who is considered by some as the ‘greatest legend’ in tennis.

Norway’s top tennis player admitted that he had difficulty sleeping the night before he was set to play Roger Federer for the first time in his career.

Casper Ruud has shed light on what it was like for him playing the Swiss Maestro during an interview with TV 2. The 21-year-old took on Federer in the third round of the French Open last year which he ended up losing 6-3, 6-1, 7-6. At the time it was only Ruud’s fourth appearance in the main draw of a Grand Slam.

“When you meet the man who is considered the greatest legend in your sport in history, it is clear that then you were a little extra nervous,” he said of 20-time Grand Slam winner Federer.
“I remember before I was going to play against Federer, it was a bit difficult to sleep the night before. When you lie with your head on the pillow, your thoughts come.”

Ruud says Federer’s achievements in the sport made him feel more nervous about playing him. Overall, the 39-year-old has won 103 ATP titles and currently holds the record for most time spent holding the world No.1 ranking at 310 weeks. He played his first ATP event at the 1998 Gstaad Open, which was a year before Ruud was born.

Although the Next Gen star says he has admiration for all members of the Big Three, which also include Novak Djokovic and Rafael Nadal. The two highest ranked players currently on the men’s tour.

“It was in Melbourne a few years ago, and then I remember that we sat in a large cafe where all the players sit to eat. When Federer came in, it was completely quiet and everyone turned around. Now the legend is here,” he said.
“These three legends, they look taller than they might be. They are probably around 1.85 meters, but it may seem that they are two meters because of the respect you have for them.”

Since his meeting with Federer in Paris, Ruud has managed to make a name for himself as he gradually climbs up the world rankings. In February he won the Argentina Open to become the first Norwegian player in history to have won a title on the ATP Tour. He also reached the final of another tournament in Santiago. In September he defeated Matteo Berrettini in the Italian Open to record his first and so far only win over a top 10 player in his career.

“I do not remember everyone in my career. But there are some matches that stand out a bit, and that you remember extra well. Some ball exchanges, some punches here and there that you get, which you usually do not do. It is something that stands out a bit,” Ruud explains.

Unusually Ruud confirmed that both of his parents are now classed as his employees. He is coached by his father Christian who is a former player himself. Christian is a former world No.39 who was his country’s highest ranked male player in history until his son.

“The ultimate boss is probably (my) mother. She rules over both of us. In between at least,” he jokes.