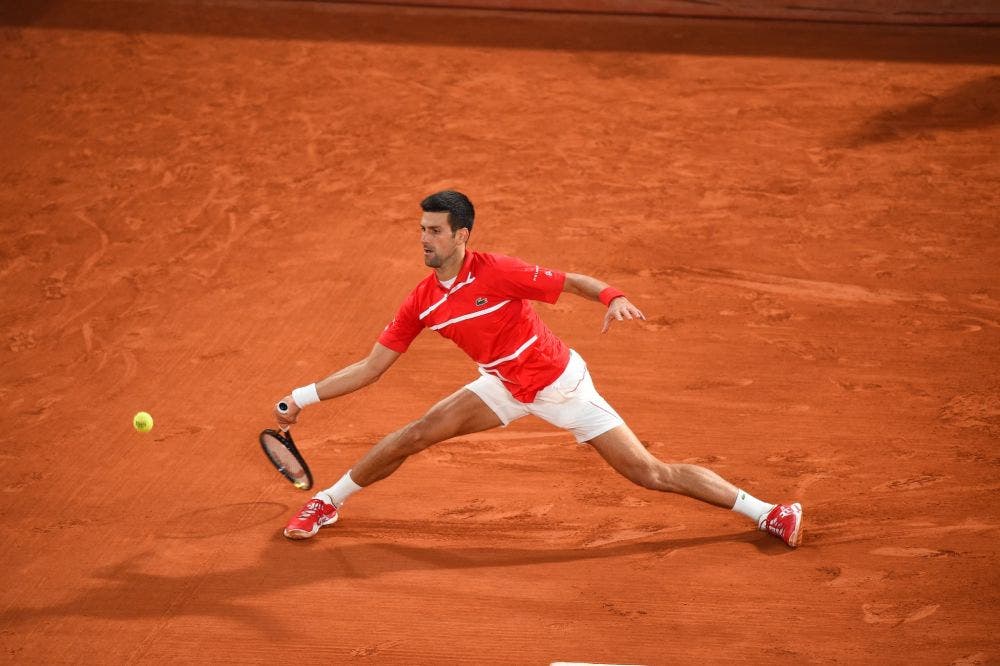 Novak Djokovic survived a come-back from Stefanos Tsitsipas to secure his spot in his fifth Roland Garros final and his 27th Grand Slam final with a thrilling 6-3 6-2 5-7 4-6 6-1 win in a 3-hour and 54 minute semifinal. Djokovic has improved his win-loss record to 4-2 in his six head-to-head matches against Tsitsipas.

Djokovic fended off a break point at the net after a 23-shot rally, as he was serving at 4-2, and hit a crosscourt forehand winner to hold his service game. Djokovic sealed his first set on his fourth set point at 5-3 with a service winner.

Tsitsipas led 40-0 in his service games at 2-2 and 2-4, but Djokovic broke him both times to open up a 5-2 lead, when Tsitsipas made a forehand mistake. The World number 1 and 17-time Grand Slam champion held at love with a service winner to seal the second set 6-2.

Tsitsipas held serve four times in the third set and earned a break point in the second game of the third set, but Djokovic saved it with a winner. They produced six consecutive holds to stay neck and neck at 4-4 before Djokovic earned the first break of the third set to take a 5-4 lead with his drop-shot. As Djokovic was serving for the match, Tsitsipas saved a match point to draw level to 5-5 with a backhand error from Djokovic after saving 10 of the 11 break points. The young Greek star held  serve to 30 and hit a forehand up the line to break serve, when Djokovic hit his forehand long. Tsitsipas saved 10 out of the 11 break points he faced after taking a 2-0 lead in the fourth set. Tsitsipas saved eight break points in the fifth, seventh and ninth games forcing Djokovic to serve to stay in the set.

Both players traded breaks at the start of the fourth set. As Djokovic was serving at 4-5 40-15, Tsitsipas hit a drop-shot to earn a break point. The 2019 ATP Finals champion got the crucial break in the 10th game, as Djokovic committed consecutive backhand errors and netted a drop shot.

Djokovic got the decisive break in the third game of the fifth set with a crosscourt drop-shot to take a 2-1 lead. The Serbian player forced an error from Tsitsipas and broke serve at 15 to open up a 4-1 lead. The 2020 Australian Open champion closed out the match with a return winner in the seventh game on his second match point.

Djokovic has scored the 37th win in 38 matches this year. The Serb has joined an elite club of seven players to have qualified for five finals at Roland Garros.

Djokovic has fended off 76 %of break points in the tournament and dropped one point on his first serve.

If Djokovic wins Sunday’s final against Rafael Nadal, he would become the first player in the Open Era to win multiple titles at each of the four Grand Slam tournaments. Djokovic beat Andy Murray in the 2016 Roland Garros final to claim his first title in the French Grand Slam tournament.

Djokovic holds a 29-26 win-loss record against 12-time Roland Garros champion Rafael Nadal, including a win in the quarter final in 2015.

“This is Rafa’s house, but I also won against him in 2015 at Roland Garros in the quarter finals. I hope to recover. It’s the biggest challenge that you could have in sports on all suurfaces to play against Nadal here at Roland Garros. I am also motivated to possibly win”, said Djokovic.

Tsitsipas came back from two sets down for the first time in his career to beat Jaume Munar in the first round before beating Pablo Cuevas, Aljaz Bedene, Grigor Dimitrov and Andrey Rublev to qualify for the second Grand Slam semifinal of his career.